Under Orders for the West of Mull

This part of our voyage is all the fault of Simon Raine, full-time cheesemaker and part-time volunteer for the Mull Tourist Board.  He can be very insistent at times and was adamant that we should visit the south west corner of Mull. Well, we’re here now and it’s OK, I suppose… 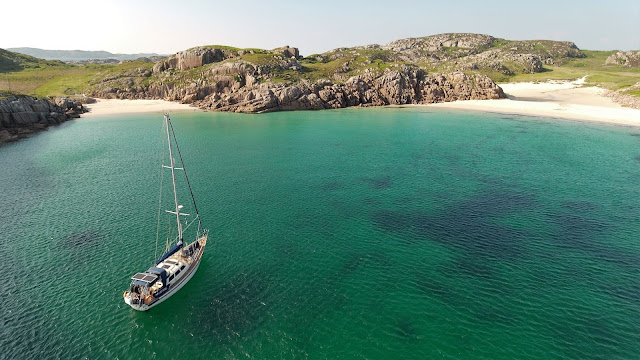 Actually, it’s bloody lovely! We sailed south from Tobermory, blown along by a very handy north-westerly, and headed for Ulva, the island separated from the main Mull landmass by the narrow and rock-infested Ulva Sound. Coming through the sound from the northwest was a bit scary because the windage on the mast, plus about a knot of tide behind us, pushed us through the rocky slalom course at about 5 knots, even with the engine just ticking over. 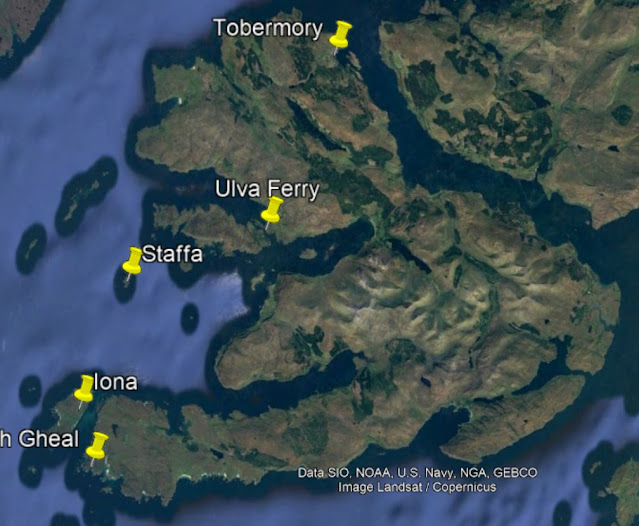 Ulva has been bought by the community after some years of neglect by its previous owners and, thanks to some diligent pursuit of grant funding, they have started to invest in this beautiful place. The most surprising thing here is the 10-berth visitor pontoon that was installed in 2016. 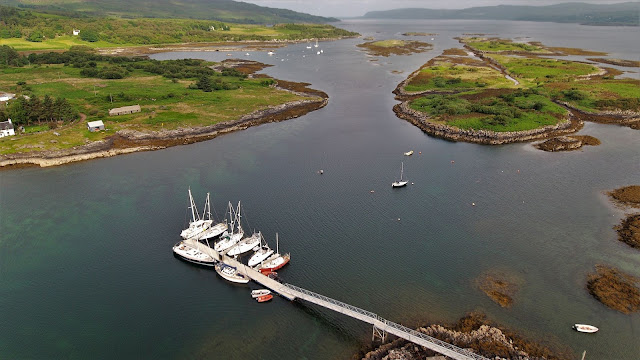 According to Mark, a very experienced blue water sailor who manages it, the idea was met with some scepticism when first mooted. “Who would want to bring a yacht into here?”, was the commonly held view but the project is a great example of the “If you build it, they will come” maxim. It has become increasingly popular and, when we arrived, we managed to bag the last available spot. This involved parking at 90 degrees to the 20-knot wind and 1 knot current, so it was a tricky manoeuvre, with plenty of onlookers for additional pressure, but we patted ourselves on the back at a job well done, once our heart-rates had returned to normal.

The outer end of the pontoon is the boarding point for the trip boats that take visitors out to see Staffa. There’s also a busy little passenger ferry that crosses over to Ulva and a small but productive fishing fleet, mostly catching lobster and crab. We met a couple of the fishermen when they brought their slightly scruffy boat alongside Maunie, at some speed, to access the diesel pump on the pontoon; initial worries were swiftly allayed when the skipper executed a neat handbrake turn and then handed us two lobsters for our trouble (great barter economy around here)!

The ferry across to Ulva gave us the chance for a coffee and excellent home-made cake at the Boathouse café – also with new owners this year, this time coming from Edinburgh. Suitably fortified, we then had a lovely hike around the southern side of the island. Thanks to some new grant funding, there was a team of builders starting projects to upgrade 6 houses and some of the ‘roads’ (just unpaved farm tracks) were getting a bit of repair work. There’s an old cottage that has been turned into a little museum and the island is rich in its basalt-column geology and human history. Its most famous occupant (and one time owner of the island) was one Lachlan MacQuarrie, who became the Governor of New South Wales and is often regarded as the father of modern Australia. We’d become very familiar with his name when we were in NSW and had no idea that he came from this remote spot. 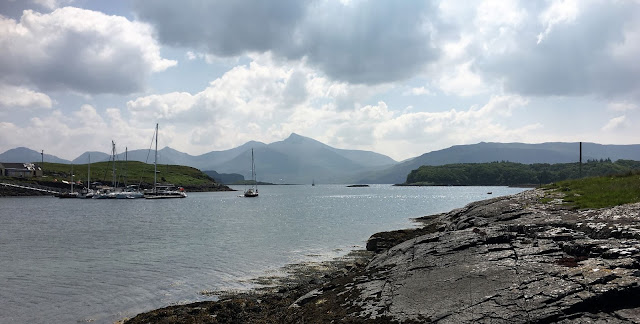 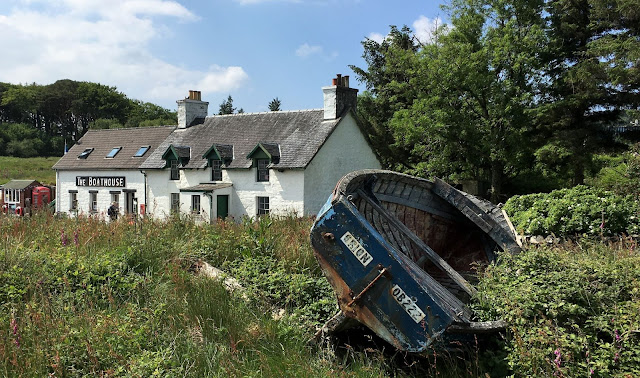 Hike done and lobsters cooked and shelled as a starter for that evening’s supper, we had another perfect sail southwest, with a quick detour to Staffa for a sail-by view of Fingal’s Cave.

From Staffa it was a downwind, due-south, 6-mile passage to the Sound of Iona, timed to coincide with high water as the Sound has some distinctly shallow patches in the middle. We had a great view of the Cathedral as we passed.

We’d hoped to anchor in the Tinker’s Hole, a very narrow but perfectly sheltered anchorage between the rocks on the south-west tip of the Ross of Mull. Unfortunately, its fame has spread and there were 7 yachts anchored there as we passed the entrance – far too many for comfort in such a small space! Instead, we had the beautiful Traigh Gheal anchorage, just around the corner, to ourselves; it’d be a hopeless spot in a southerly wind but with the breeze from the north-west it was just perfect. 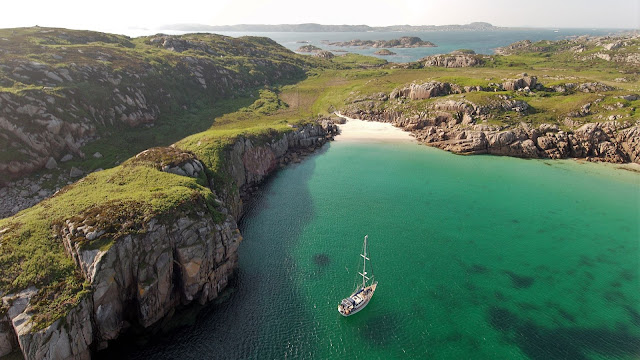 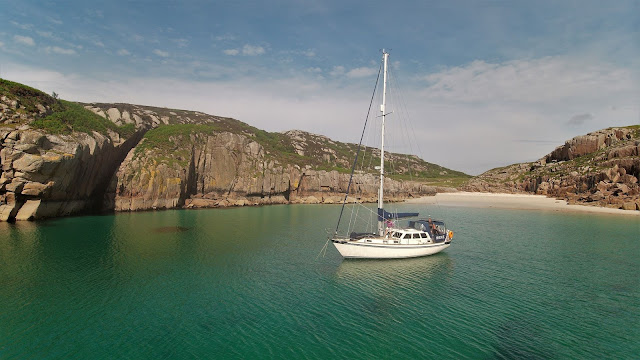 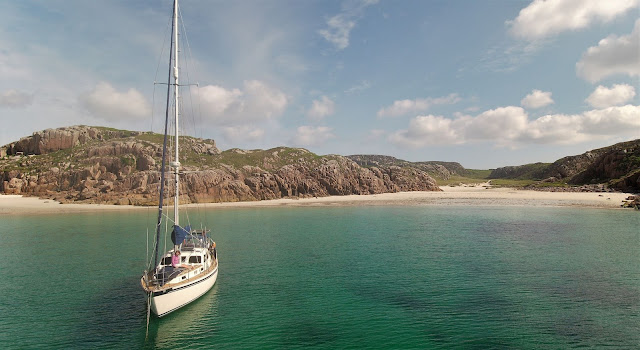 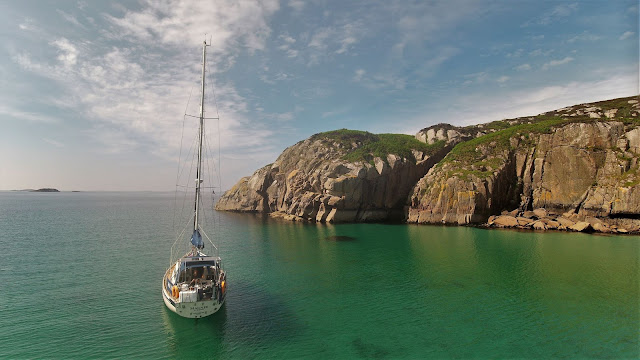 For those wondering about the lobster starter, we can confirm that it was delicious. However, note to self: lobsters give off a permanent shade of tangerine so Norma, Gary and other Blackpool fans will be pleased to know that Maunie now has a full range of chopping boards in Blackpool colours!

An added bonus with this anchorage has been the wildlife. As well as cormorants  roosting vertically on sheer rock faces and seals checking us out, this morning we spent a good half hour watching one or more otters playing in the kelp. One was lying on his back. We eventually flew the drone to get a better view without causing any disturbance only to find our relaxing otter was indeed another piece of shiny kelp. Never mind!

We are now heading south towards Islay and the distilleries! We’ll probably break the passage with an overnight anchorage on the east side of Colonsay to allow us to get our timings right for the narrow Sound of Islay, which separates Islay and Jura and has fast tidal streams, tomorrow.

Stop press: An on-passage message from another Vancouver 38P, Quahog, sailed by new owners, has brought a slight change of plan with us heading for Loch Tarbert on the west side of Jura.