It was just wonderful to have Maunie back sailing again, in bright sunshine, on Friday. With a super-shiny bottom and very little weight aboard, she felt really fast in the lovely F4 breeze. 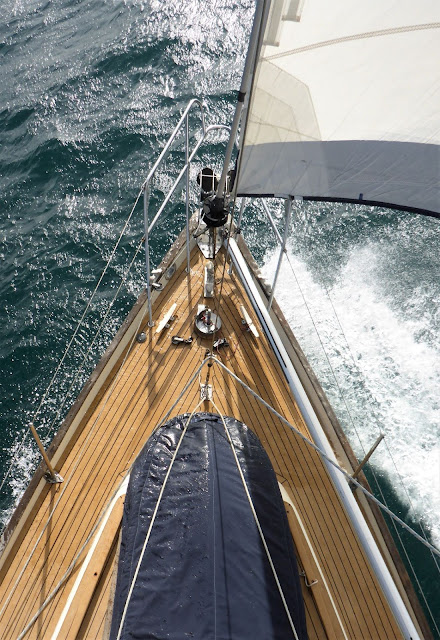 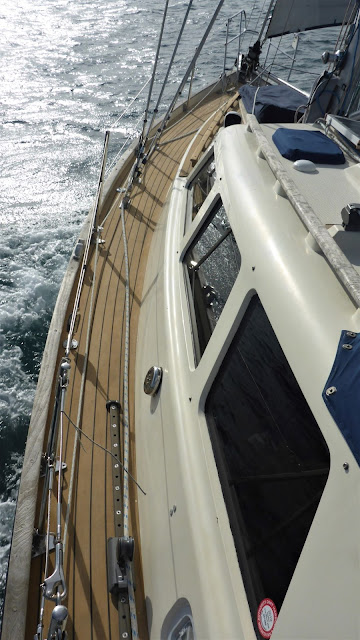 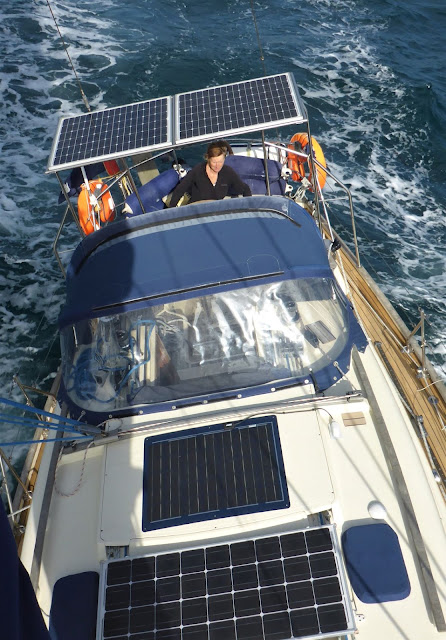 Our sail was fairly short as we had to return to the mooring for Rick and his son Joel to come to do some final fairing of the deck. Rick's a perfectionist so was sorting minor details that most people wouldn't even notice. 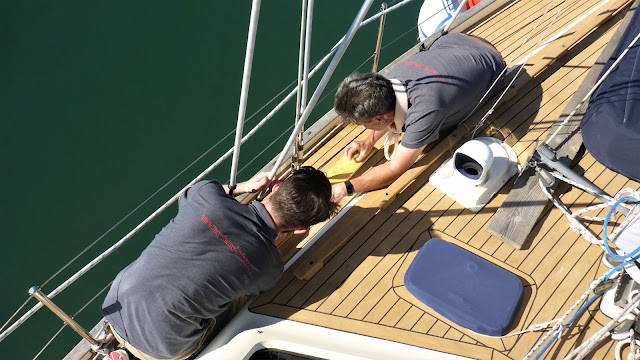 Down below, things are almost back to normal though we have various items of joinery back in our garage for re-varnishing. As ever, the boat projects will continue to keep us busy...
Posted by Graham and Dianne at 09:14 No comments:

Farewell to Baltic Wharf - the project is complete

After just over 2 months, (two long, hard and testing months) Maunie is back on her mooring, looking rather splendid. 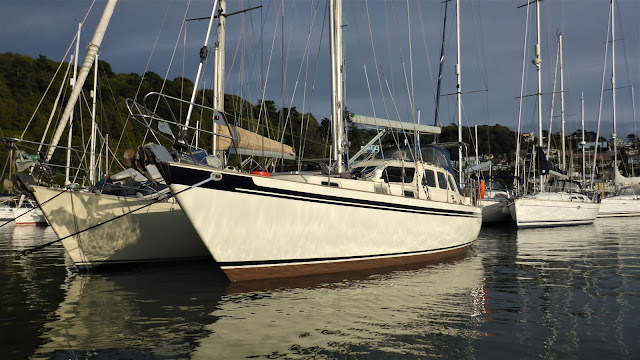 The choice of Baltic Wharf Boatyard in Totnes worked out really well for us. The yard was once a major importer of timber from the Baltic and, in the 1980's, ships of up to 280ft in length somehow weaved their way up the meandering upper reaches of the River Dart to unload their cargo: 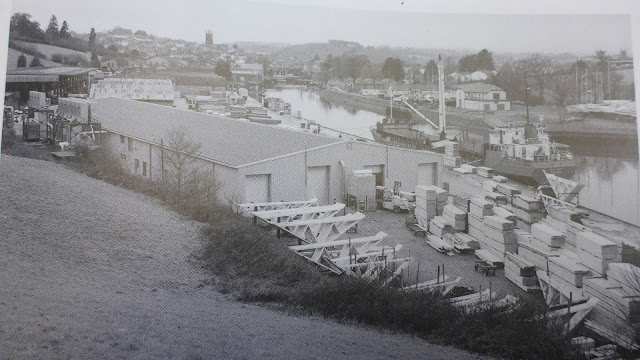 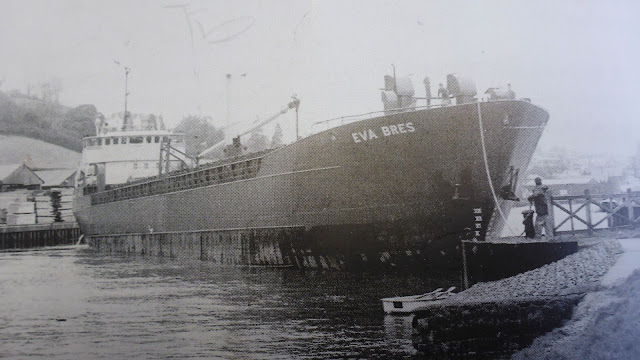 Our work-shed was once used for seasoning timber so it was spacious and well-ventilated but kept us sheltered from the hot sun and rain as we worked long hours to complete the process of replacing all the remaining deck fittings:

With all the work going on it was great to have a twice-a week- visit from Rick with his amazing solar-powered rickshaw coffee machine. 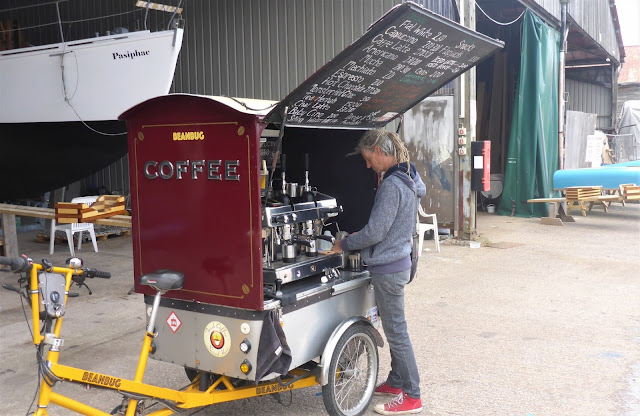 The yard team of Steve, Fletcher and Steve, supported by Sue and Trish in the office, were really friendly and helpful and took a lot of care whenever they moved Maunie.

Though we did most of the work ourselves, there were certain jobs that we needed to hand over to the professionals. Once David and his team had completed the repaint and we had applied the Coppercoat, there was the job of removing the propeller shaft to replace the worn cutlass bearing. The snag was that it hadn't been removed for at least 10 years so wasn't at all keen to shift.

Steve from New Wave Marine came to our rescue again; he made up a special removal tool and managed to get the shaft to shift at last. In theory, removing the cutlass bearing should then have been easy but, of course, it had also seized. Nothing for it but the application of a saw, drill and a large chisel. We were glad to have Steve's expertise on this and he admitted that it was probably the worst bearing he'd had to remove.


Graham finished the job of refitting the prop shaft, putting new waterproof packing into the stern gland and, finally, fitting the new propeller. Due to the unusual wear that we'd found on the original propeller's bearings, Brunton's gave us a significant discount on a new, bigger H6 model which should work much better on a boat of Maunie's weight.

So, with the usual last-minute rush of final jobs, we re-launched at 11.30 on Friday and motored down the Dart back to our mooring. The new bearing and propeller combo was much smoother and quieter than before and, with her super-shiny hull and minimal weight of kit aboard, Maunie glided through the water with ease. We returned to the mooring to find our new neighbour - fittingly a Vancouver 34 Pilot, just like our last boat, called Hejira. 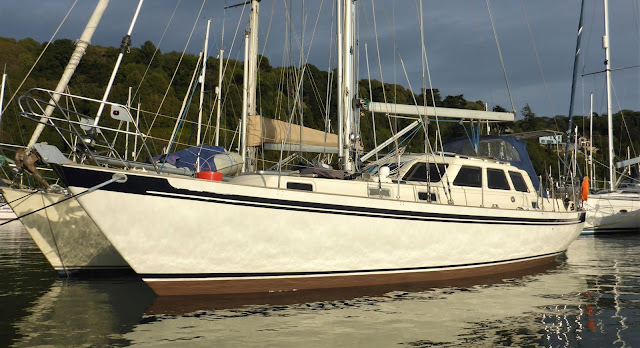 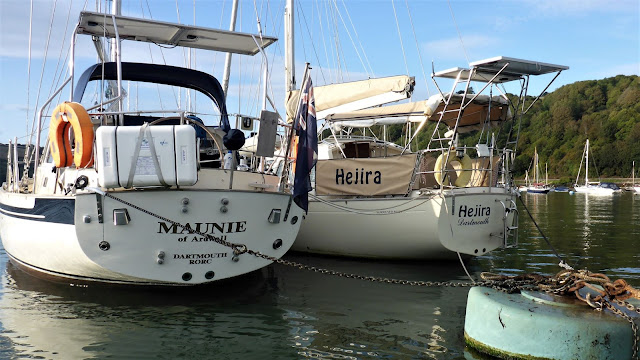 Of course, the project isn't quite finished - there's still a fair amount to do down below, there's still some detailing and polishing of the upper decks to do and the mainsail needs to be brought back aboard but we are pretty much there. It has been a much harder project, both physically and emotionally, than we'd expected but it's really satisfying top know that we have given Maunie a new lease of life and that the nagging worry of leaky teak decks is now behind us.

We'd like to thank all the people at Baltic Wharf, plus Richard our deck expert, for all their support and I'd like to thank Dianne for all her hard work and for keeping me going when things got tough. Finally, a huge thanks to Graham from Dianne. Graham has worked with endless energy, enthusiasm, innovation and engineering expertise. The result? Maunie looks stunning and Dianne has new skills.

Posted by Graham and Dianne at 11:57 No comments: