After a pretty hectic summer, getting the hang of both working long hours and sorting house and garden, we finally took this week off and planned for some cruising aboard Maunie. In particular, we'd hoped to make the 95 nm, due south, crossing of the Channel to Treguier in Brittany. The idea was to meet up with Adam & Cindi from Bravo while they were visiting the Boreal yard to see their new boat take shape.

Of course, November isn't exactly the best month for crossing the Channel and we had brisk SW and southerly winds all week which whipped up a big, short-wavelength swell. Much as Maunie is well equipped to tackle anything, we didn't feel that being the Beating Keatings for 18 hours or so would be much fun!

Still it was good to be living aboard again, even if only for a few days, and our old adverse-weather trick of scooting up river for a pub lunch at the Ferryboat Inn in Dittisham didn't disappoint. We even had an amazing fly-past on the way back - we heard the unmistakable 'wop-wop-wop' of a Chinook helicopter which appeared at only 100 ft above the water. 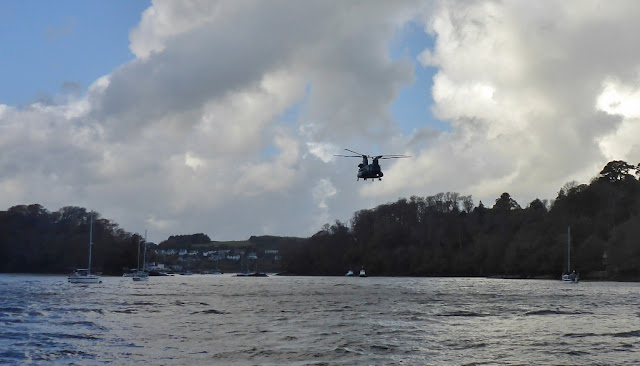 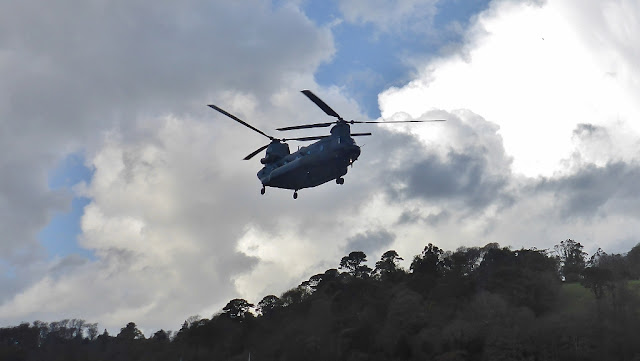 Southerly winds combined with strong ebb tides can result in mildly uncomfortable waves at our mid-river mooring so we took advantage of the cheaper winter berthing rates for two nights in Darthaven marina. This allowed us to plug in to shore power for a fan heater to keep things warm below decks and made the walk to the excellent Steam Packet Inn all too easy.

We did get a cracking day-sail in blustery conditions and lumpy seas; strangely we were the only yacht out! We were keen to test out our new addition; yes, we've just spent another dollop of money on the boat (no surprise there, then) but, so far, it feels like a good decision.

After our last boat, a Vancouver 34, the only downside of moving to Maunie, from a pure sailing perspective, has been the steering. The 34 had a rudder whose pivot point is set back a few inches from the leading edge to give it some 'balance'. This, combined with the long keel, gave the boat a very easy feel on the helm and superb directional stability.
The 38 has a full length skeg supporting its leading edge, so the huge rudder has no such balance and the helm can be a tad heavy at times. The relatively small 30" wheel doesn't help with leverage (and makes it hard to reach when helming from the side of the cockpit) but access to the starboard cockpit locker wouldn't allow a bigger version. However, for a while we've been eyeing the clever but expensive Lewmar folding wheels so we finally made the decision to buy one.
During our first trial sail, we were delighted with the difference that a 40" wheel made to the sailing experience. 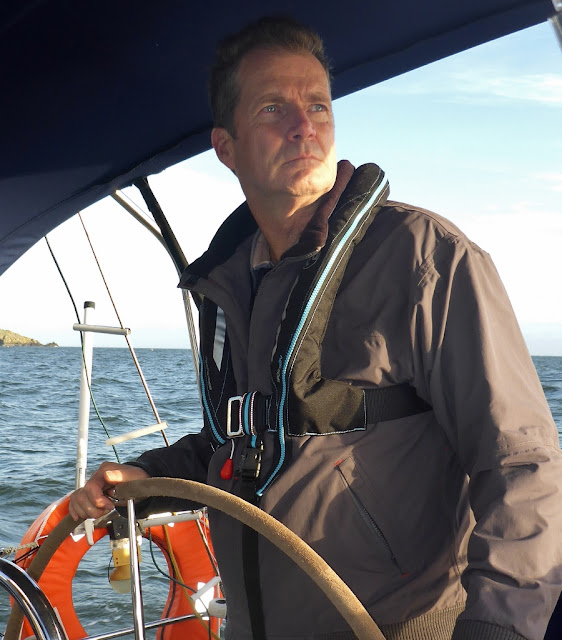 Our week ended up being just a few days aboard so we left, rather frustrated not to have been able to get to France and remembering the challenges of winter sailing in Britain. At the beginning of December we'll move Maunie onto a temporary pontoon mooring for four months - it comes with the luxury of electricity so we'll be able to keep a dehumidifier on board and have a heater running when we're there.Just as well, we think, if the media reports of a very harsh winter are to be believed.

Meanwhile the current weather is amazingly mild for the time of year and, returning home, the mower came out to deal with the still-growing lawn and the dead leaves scattered over it.

Posted by Graham and Dianne at 10:02 No comments: