We're in the final few days of manic packing and house-decorating before we fly back to Australia on Friday. Graham finished work on Tuesday (on a bit of a high, having successfully presented to the Thatchers' Board the main investment project he's been working on) and we're now busy packing everything into storage and doing final painting and decorating to leave the house and garden in near-perfect order.

Our efforts have been slightly delayed but very enlivened by visits from Bertie the cat, who belongs to near neighbours; he's the most affectionate moggie and stops us from working for enough time to make us enjoy the autumnal sunshine: 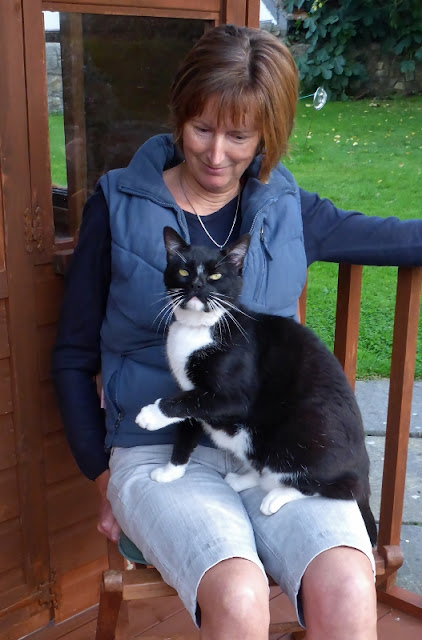 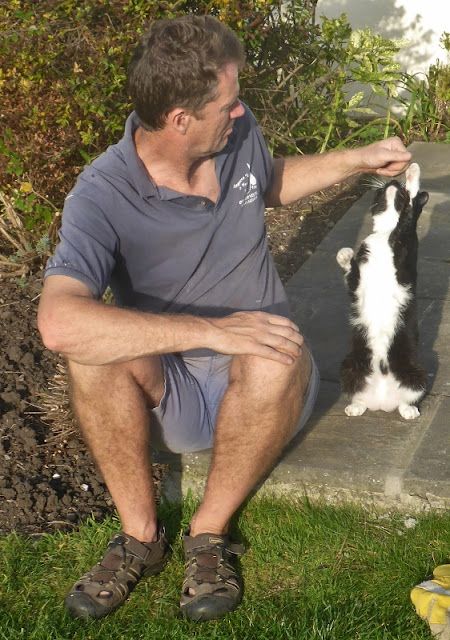 We've also had a weekend away in mid-Wales to return Pippi, our god-daughter's car. A lovely supper with Barbara and Steve was followed by a very enjoyable tasting (Graham will certainly miss the malt whiskies in Australia!): 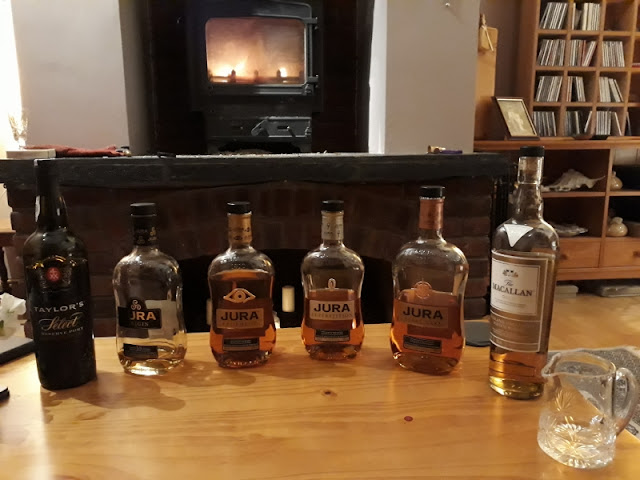 Finally, we had a great Sunday lunch at the local pub with Duncan and Elisabeth, complete strangers linked only by sailing (as is often the way, these days). They have bought 'Quahog', the Vancouver 38 built straight after Maunie, and plan to sail off into blue waters next year so we spent a lovely afternoon sharing tips and enjoying hearing their plans.

The aforementioned 'local pub', The Hood Arms has been a complete joy, sitting at the top of our lane. The publicans are so welcoming it will be tough to drag ourselves away. At the end of our Sunday lunch, Paul, one of the owners, came along and offered us a drink 'on the house'. Cheers to The Hood Arms and wishing them a successful and not too exhausting festive season!

The next update will be from Maunie. Can't wait to be back aboard her!

Posted by Graham and Dianne at 21:00 No comments:

One month to sunshine

G'day from a windy and distinctly chilly Somerset. It's suddenly sinking-in that, in only 26 days, we'll be back in a place where G'day is regarded as a normal greeting, so the pressure's on to finish the house jobs and start packing things away for our return to a 38ft home. Actually, we have to say that the house and garden are now looking lovely and we hope that the letting agent's optimism will be rewarded with some wonderful tenants signing on the dotted line soon.

As British readers will know, it hasn't been a great summer - the weather has been 'changeable' (pretty crap actually) and the mood of the newsrooms has been overwhelmingly downbeat. The Prime Minister told us that the country needs a 'strong and stable' government back in May when she rashly thought that a snap general election would be a fine and dandy idea; she's now (at the party conference) downrated our needs to 'calm' government, prompting the question of where her team now sits on sliding scale from 'inspirational' at one end to 'dire' at the other. As we feared, the machinations of the Brexit negotiations and internal party bickering have rather taken the politicians' eyes off the ball when it comes to dealing with the pressing short and long term issues that the country faces.

Anyway, enough of all that. Despite the challenges, we've enjoyed being back at home. Graham's job at Thatchers Cider has proved to be challenging but enjoyable and its scope has expanded over the months. Initially focusing on a huge investment project to build a new automated warehouse (due to begin building next May), he's now looking at all sorts of other things that have him investigating areas that are new to him. Thatchers is a great business, family-owned like Yeo Valley, that's growing very quickly thanks to very loyal existing cider drinkers and many more newcomers to the brand. A few weekends ago about 8,000 of them turned up for an open day at the cider mill (5,000 more than at the last event two years ago) so Graham returned from the day having totally lost his voice after five hours of non-stop tour-guiding around the canning plant. Here's a little video of the day:


He finishes the job on the 24th October, so the week after will be a flurry of packing and stowage!

Meanwhile, Di has been very busy sorting lots of house and garden jobs so the odd weekend off has been particularly welcome for us both. We did a mini Northern Tour to catch up with both our families (and, for Graham, meeting great nieces and nephews for the first time), We also got to meet Sweep, the latest addition to Norma (Di's eldest sister) and Mick's household; too cute! 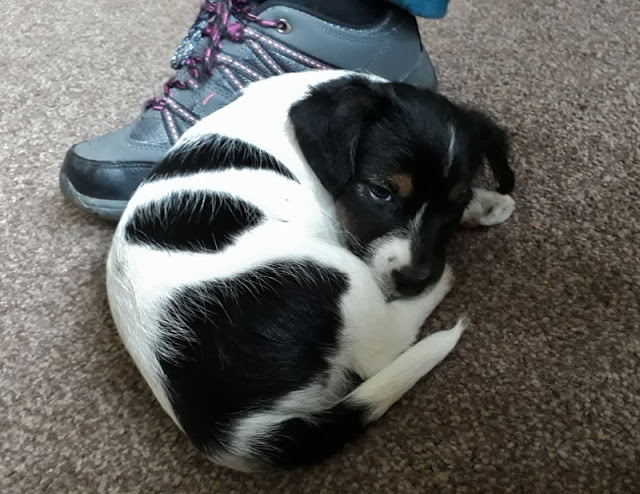 Then, last weekend, we had a visit from Colin and Ana from the yacht Ithaka. You may remember that we waved them goodbye on Christmas Day 2015 as they set sail from Auckland to Chile (an amazing 6 week voyage) and, thanks to our SSB radios we managed to chat to them almost every day of the crossing. Here's a reminder of sailing with them just before they left: CLICK HERE

Their journey was awe-inspiring and saw then sail down the coast of Chile, down to the very chilly southern tip of South America and then up to the Falklands and on to Brazil, the Cape Verde islands and back to France where Ithaka is now awaiting new adventurous owners. Actually, we're rather hoping that Colin and Ana's plans will be just as unreliable as ours and that they keep her for a few more seasons - well, there's the French coast to explore, then the Baltic and, well, after South America, Iceland would be pretty straightforward! If you're interested here's a link to their YIT blog Click here

Both yacht crews really enjoyed swapping sailing stories and photos of our respective trips; when you have so much in common, conversation never falters. We managed to get some good walking in and a proper Sunday lunch at the Hood Arms so it was a great weekend.

Colin summed up the feelings that we share about how it's sometime difficult to talk about our sailing experiences, to folk who've not 'been there and done it', with a great little poem in our visitors' book. I hope he won't mind us sharing it!


They think we come from outer space,
The 'normal' folk of human race,
Little they know of GRIBs or chain,
Of bommies, kelp, cyclonic rain.
To Kilve we drove, for kindred spirit,
In Di and Graham, we find no limit.
Talk and walk and eat and drink,
and reminisce, with time to think,
Of voyages new, and thing to do.
We drive away, refreshed in mind,
Feeling less unique among mankind.

Of course, loyal blog followers like you don't fall into the 'normal folk' category! Thanks to Trish (Maunie blog super-user) for the prompt to add this post.

We'll do one more UK update before we fly back to Australia but, for now, best wishes from us both.


Posted by Graham and Dianne at 19:16 No comments: