The sail round the north west corner of Tenerife yesterday was dramatic in terms of scenery and weather. We had blue sky to the north and big black menacing rain clouds following us along the rugged, mountainous coast. Luckily we crossed wakes with a lovely 62ft French ketch called Frida; she was completing a 4 day passage from the mainland so we took some photos of her and one of her crew reciprocated. We've ended up in the same marina and this morning the photographer called round to Maunie with a memory-stick of his pictures so we were able to swap them with ours. Here are three that really give a good idea of the scene: 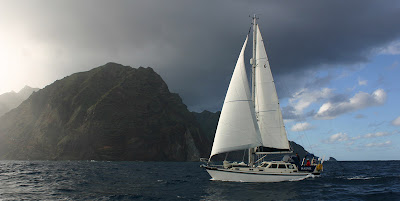 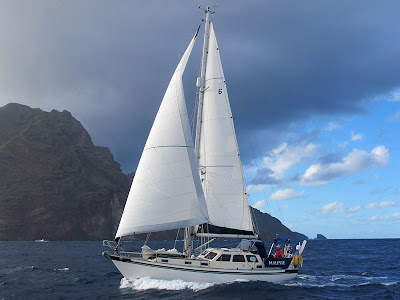 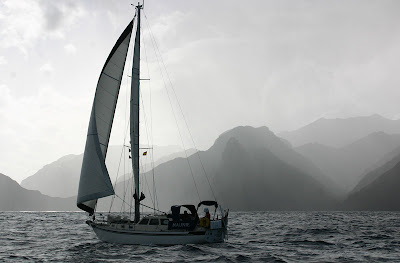 Today, by contrast, has been a shore-based, chore-based one. This morning we managed to bag one of the two washing machines to clean clothes and bedding; the washing was pegged out on a triangular washing line strung from the forestay to the forward shrouds and, with a combination of sun (at last!) and a good breeze, was dry in about any hour. Meanwhile we were able to give the boat a good airing and ourselves a bit of a spruce-up as well.

In the afternoon we walked into the city on a recce mission.There is a huge Carrefour here (a bit like a Tesco Extra) and a Cortes Ingles (a very large Waitrose) so we visited both to see what each offered. There are similar stores in Las Palmas but we think we'll try and do the big shop for non-chilled items here tomorrow rather than joining queues of yachties at the checkouts there.

We aim to arrive in Las Palmas on Monday. Fergus and Richard arrive a week later so by then the boat should be pretty much prepared and we should have worked out the geography of the huge (800 boat) marina. 270 or so of these boats will set sail on the 25th November so the atmosphere with be interesting in the days leading up to the off. We look forward to catching up with a few boats we've met on our way here, especially our friends in Stormvogel. Peter's blog makes interesting reading - they have continued to spend huge amounts of time, effort and money to resolve various issues with the boat but it sounds as though they are nearly through the process so we'll share some beers with them not doubt.