From time to time we mention other boats and crews that we have met on out travels; many of them we've met either on the ARC or out here in the Caribbean but one or two are from back in England.

One such boat is Jacaranda. Sally and Mike are taking her around the world but in only two years so, whilst they left Falmouth only a week before we did and set off across the Atlantic a couple of days after the ARC, they now have a pretty tight timescale ahead of them.

Dianne met Sally when they were both on the Ship's Medical Officer's training course 12 months ago and, a month before we left, the four of us met in a Somerset pub for a meal and to compare notes on how stressed we were about emptying our respective houses and preparing our boats for the voyage ahead. Mike is ex-RN and was Chief Engineer on a submarine so is incredibly practical and has huge deep-sea (sorry) experience. They were joined for the Atlantic crossing by their sons Tom and James and had a good voyge, apart from the Whale Incident. They think they hit one at speed during the night and there was a significant whale imprint in the leading edge of the keel when they lifted the boat out for antifouling in Rodney Bay. Luckily Jacaranda is a steel yacht so there was no significant damage; not sure how the whale fared though.

Anyway we bade farewell to them on Monday as they set sail, non-stop, for Panama. They hope to get through the canal in mid to late February so we'll be following their progress with interest; Sally has already shared lots of information about the various agents that you have to use in Panama and the Galapagos and they will kindly let us know of their experiences. It'll be invaluable to have some really up to date information. So we wish Sally, Mike, James and Rhi a very safe and speedy passage to Panama. 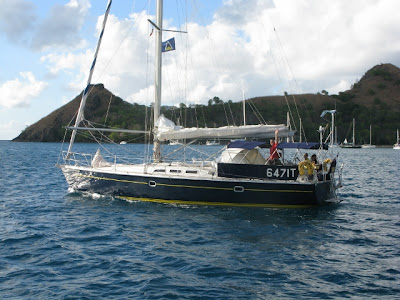 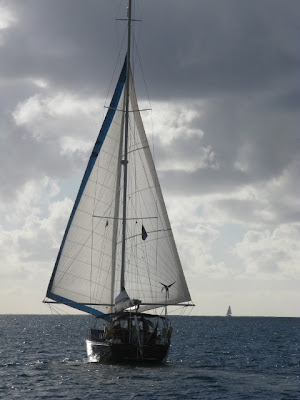 Downwind for 1200 miles to Panama