Happy New Year to you all!

Yesterday was a busy but fun day starting with Graham cycling out on a borrowed bike to go and collect our car! As we said before, we’d been looking at different vehicles and, once we’d found that camper vans were very expensive (and being snapped up for the summer), we started looking on Trade Me (the NZ version of eBAy) for a suitable alternative – something roomy and reasonably economical - and decided that a Honda CRV was just the thing, plus a tent (more on this in a later blog!).

NZ imports heaps (as they say here) of ex-Japanese market cars so we looked at a few but Graham's engineering background couldn't quite reconcile the handbook being in Japanese nor the complete absence of any owner or service history. The Kiwi mentality is very laid back so they’d just say ‘she’ll be right’ and make a purchase but luckily we saw an advert for a private sale of a low-mileage 2000 model. Things looked promising when we arrived at an extremely nice neighbourhood and the owner pressed the remote control and the garage door rolled up to reveal a very shiny CRV. He’s had it from new and it had only done 110,000km (50k miles!) as their third car; it looks almost like new and has a very rare thing in NZ – a fully-stamped service book (by the Honda main dealer) with all the big jobs like cambelt and coolant changes done on time. It’s lovely to drive and we had a super first trip out over the Auckland bridge to North Head to climb the volcanic hill and view the city in the afternoon.


North Head is a volcanic hill which has acted as a fort to protect Auckland from as long ago as the 1880's when it was feared that Russia might invade so there are old gun emplacements from that ere and miles of tunnels and guns from the first and second world wars. The view across the harbour entrance to Auckland is, as they say here, awesome!


The grand finale of the day was the fantastic firework display from the Sky Tower which we watched from the comfort of our cockpit. 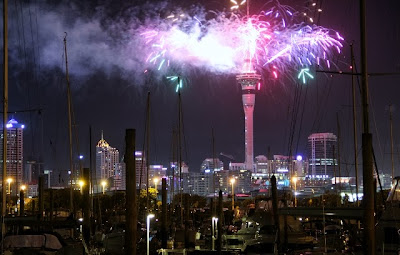 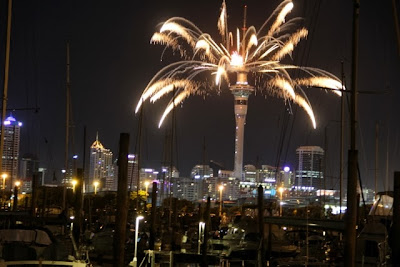