We're certainly enjoying some unusual experiences here in Neiafu (18  degrees 44 minutes south,  174  degrees 00 minutes west, if you'd like to locate it on Google Earth). A meal with a family in their house on Tuesday was quite something (more in another blog) but yesterday we went sailing in a Vaka. 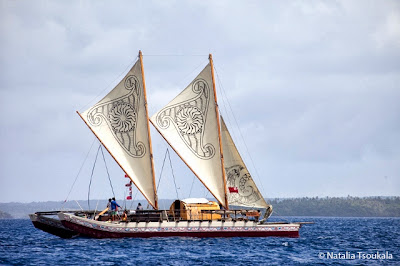 A Vaka is a traitional Polynesian voyaging canoe - a catamaran - and these vessels once roamed all across the Pacific, trading and exploring. Over more recent years the ancient navigational skills had been all but lost as people remained on their own islands and relied on commercial shipping for trade, so in 2010 a philanthropic foundation had seven Vakas built in New Zealand, crewed by Polynesians from different islands. The fleet sailed to the Tuamotos (in 29 days) and up to Hawaii, the western seaboard of the USA and back down to the islands. There's an excellent website http://pacificvoyagers.org/the-voyage if you'd like to read more.

The new Vakas are pretty high-tech, beneath their traditional rigs. The hulls are fibreglass (and have comfy, if slighly cramped, bunks for up to 16 crew) with retractable centreboards. The wooden decks (lashed to the hulls with modern synthetic rope) have intricate carvings but a clever deckhouse containing a small galley and navigation station (with GPS and VHF radio) and support a large 2kW solar panel array which provides power to two very funky retractable 10kW electric motor pods to drive the boat in harbour. However they are still steered using a long and very heavy steering oar (which needs up to 4 people to hold it in a blow) and the deck at the helmsman's feet is carved with an ancient star compass; during the voyages the crew learnt to use this to keep a proper course. The vessels are pretty big - 72' long, 21' in the beam and weighing 13 tonnes and the motive power is a distinctive two-masted rig of 1033 square feet. As we discovered for ourselves, they are pretty quick - we were doing over 10 knots in a Force 4 breeze.

'Our'  Vaka, the Hine Moana, sailed with a pan-Pacific crew of Tongans, Fijians and Samoans and her Tongan skipper, the irrepressible Aunofo who crewed on the original voyage from NZ, has chartered now her from the foundation for the nominal sum of $1 for four months. In return S
she has trained a crew of 7 local lads and we were her forth commercial day-trip - we sailed with the crews of Stormvogel and Exit Strategy. We were mightily impressed with the vessel and with Aunofo's skill at handling her - we had some great sailing, with a wonderful reef snorkel as we anchored for a superb lunch.

We really enjoyed our day and here are a few photos: 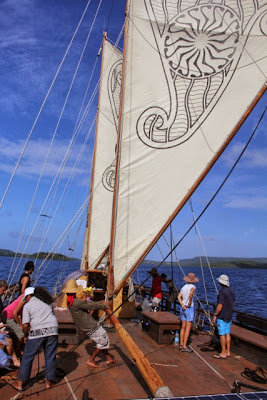 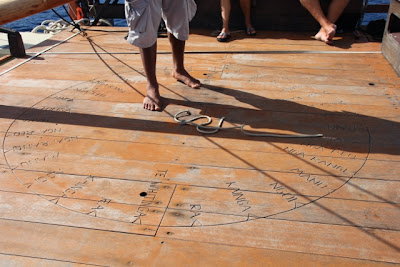 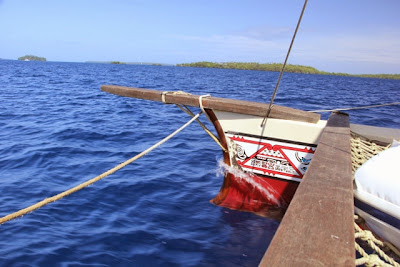 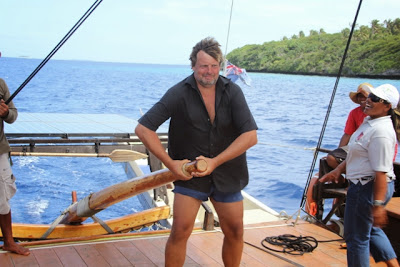 Peter at the helm, with the skipper looking on 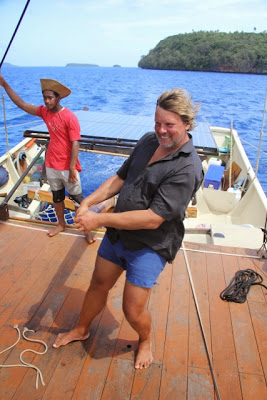 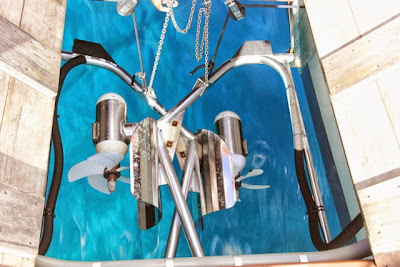 High-tech electric propulsion
Posted by Graham and Dianne at 09:51