Happy New Year from the Maunie crew! We spent a great New Year's Eve in the company of the crews of Roysterer, Oystermist and Stormvogel with a superb meal at our now-favourite Jambe de Bois andn the spectacle of amazing fireworks all around the bay at midnight.

Peter and Heidi arrived for an impromptu lunch aboard Maunie wearing their new, specially-designed t-shirts: 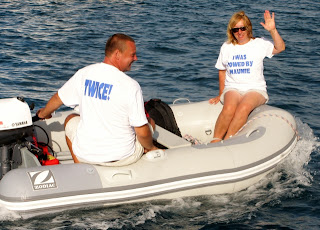 They presented us with our own versions - who says that the Germans don't have a sense of humour?! 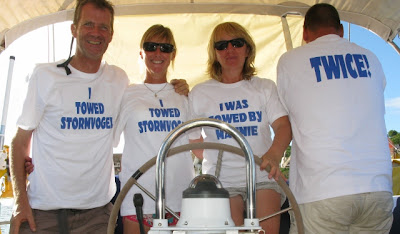 After a slightly slow recovery day on the 1st, we formally cleared out with customs and immigration in Saint Lucia and had a brilliant 34 mile sail north to Martinique. 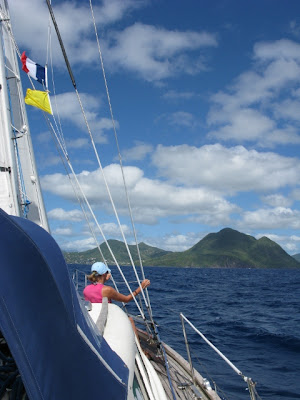 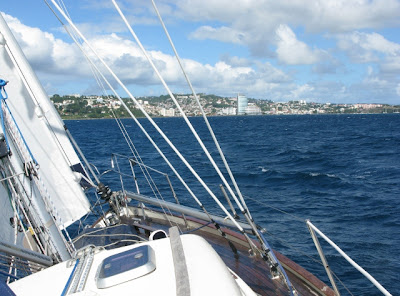 The contrast between the two islands is amazing: Martinique is prosperous, organised and very French. We sailed into the capital, Fort de France, which boasts high-rise buildings, traffic lights and well-tended parks, with modern air-conditioned Mercedes single-deck buses on well-maintained roads. The cars are different too - lots of Peugeots and Renaults but also plenty of Audis, BMW's and Mercs. Best of all, for us, even the little 'budget' supermarket has fresh meats, French cheeses and good wines at reasonable prices. We'll be stocking the boat here! We ate very well in a local restaurant last night.

In spite of the city's size, we are anchored just off the park (with no mooring charges). However this morning we had a heart-stopping moment when a 50ft ketch (very scruffy) left the anchorage with his sails set. As he moved towards us to recover his anchor his sails filled and he veered towards us (Graham had been watching him with some concern so he shouted a warning and had a fender ready). Luckily we had our dinghy hoisted alongside Maunie (a routine anti-theft precaution) so it acted as a giant fender and we were spared damage from the blithering idiot; Graham explained to him just what he thought of his antics in words that needed no translation!

We look forward to spending the next few days exploring various anchorages in Martinique before heading north to Dominica, which will be another big contrast. We'll be fairly reliant on internet cafes for wifi to update the blog but will check emails regularly via the sat phone.