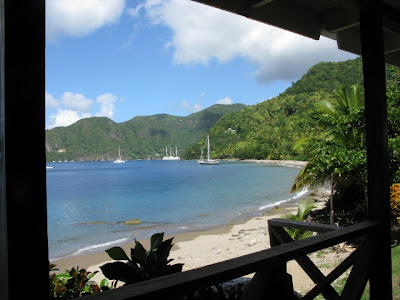 Graham admits to having been feeling slightly out of sorts since we arrived in Saint Lucia. It's partly due to the heat, the change of food and, probably, all the rum punches and Piton beers but he came to realise that it was a mix of anti-climax after the challenges of the trans-Atlantic and the absence of a clear agenda ahead.

Since the beginning of the year we've been working to a distinct and pressing timetable - well several timetables, really, each with its attendant to-do list. We've both been focussed on tidying the loose ends of our respective jobs, getting the house ready to rent and, of course, preparing Maunie for our voyage. Once we left England, we were still very much on a time-critical plan to get to the Canaries in plenty of time for the ARC and the voyage across to Saint Lucia was obviously one of pushing the boat and crew as hard as we could to make good time. So, once the post-ARC parties finished, we were left in a very sunny place and it's taken us until today to realise that it's ok to relax and have a holiday! 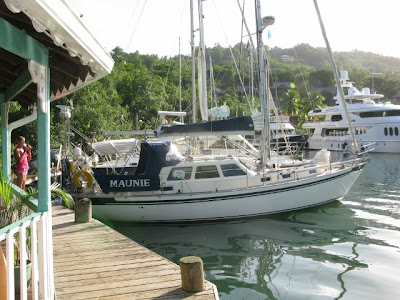 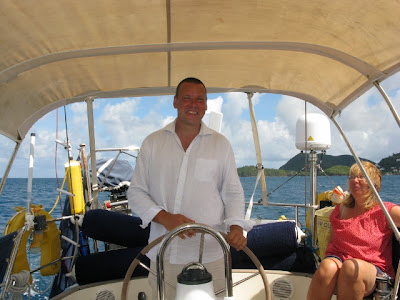 So the holiday bit has now started - with some gentle exploration down toward the south of the Island. On Friday Heidi and Peter from Stormvogel joined us for a day-sail down to Marigot Bay - a beautiful but fairly touristy bay where, so the story goes, an entire British fleet escaped detection by the French navy  by camoflaging their rigging with palm leaves. A good lunch was rewarded by a nice beat back up to Rodney Bay and Peter in particular enjoyed being back under sail; we obviously did't let him anywhere near Maunie's engine!
For the last couple of days we've headed south again, this time to a pair of pretty much deserted anchorages. Mind you, out here nowhere is entirely deserted as, out of thin air  a little dinghy with a big outboard carrying one occupant (wearing his most engaging smile) will appear. "Hello Skipper, welcome to Paradise! My name's Sunshine". Last night's Sunshine was terribly keen for us to use his 'mooring ball' (actually a small plastic bottle on a rope of indeterminable quality attached, one hopes, to something relatively heavy on the seabed). His 'special price' of $EC 80 (about £20) was greeted by laughter of disbelief by the Maunie crew (more expensive than a night in the marina) and we anchored for free instead. Can't blame these 'boat boys' for trying to make a living and I'm sure some people fall for the routine but we've already become quite adept at saying 'no' firmly and politely.

So yesterday morning saw us snorkeling from the boat before breakfast with a wonderful range of brightly coloured reef fish all around us and different types of coral below. It marked the start of Graham's delayed relaxation process. We watched the local fishermen at work in their pirogue (a narrow wooden open boat with a large outboard motor) - they had 5 men aboard, three of whom suddenly jumped overboard. These guys acted as spotters, looking for the shoal of fish, and they'd shout as soon as they saw their quarry; the boat would then circle around them, laying out a long net. The swimmers then climbed back aboard and helped haul in the net. 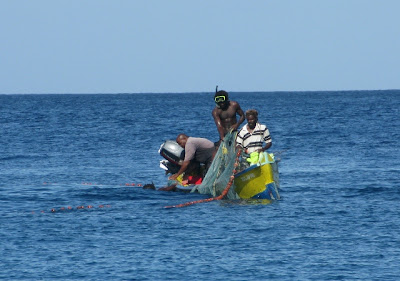 After breakfast we sailed on about 7 miles south to the Pitons - Saint Lucia's famous volcanic peak which rise spectacularly from the sea. The excellent Doyle's sailing guide advised that Benny of Harmony Yacht Services would be helpful via the VHF radio and so he was, organising his son (Benny Jnr) to meet us and lead us to one of his well-maintained and free moorings right below Petit Piton so we could have Sunday lunch at his  wife's excellent beach-front Harmony restaurant. Having organised this in advance we could happily fend off 'Peanut' and 'Happy Man' in their dinghies with the magic words "We've sorted everything with Benny" which made them disappear without argument. 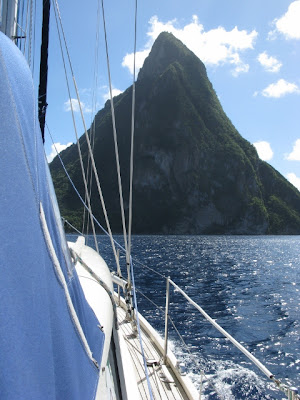 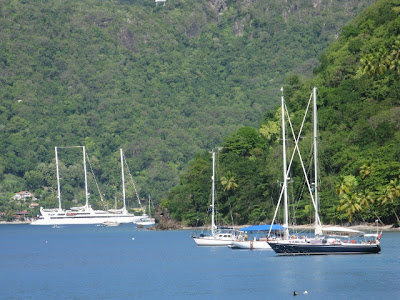 Maunie moored up at Harmony Beach

Lunch, Creole Fish followed by flambeed bananas, was as simple as it was delicious; it was a shame we were the only diners (the World recession is definitely hitting small places like Harmony out here; upmarket hotels and the super-yacht market seem unaffected).
Relaxing Sunday was completed with a lovely sail back up the coast to Rodney Bay and our familiar anchorage off Pigeon Island. We had planned to return to the eccentric Jambe de Bois for another night of Jazz but there was a twist in the tail just in case we were getting too relaxed. Our normally brilliant anchor struggled to get a grip on the seabed so we hauled it up again to find a huge ball of discarded fishing net and rope wrapped around it. It took  Graham about half an hout to cut it off (it's now sitting in a smelly pile on the foredeck awaiting a trip to a shore-side skip) by which time it was nearly dark. We eventually anchored safely just ahead of 'Roysterer' and Penny and Peter kindly invited us aboard for an excellent supper.

We're staying here for New Year's Eve (more importantly, it's Dianne's Birthday) as, apparently, the combined fireworks from all the beach-front hotels and bars are tremendous. At the moment we're at Jambe de Bois enjoying a birthday breakfast and using their wifi to catch up on emails.

Happy New Year from us both and here are a few more photos: 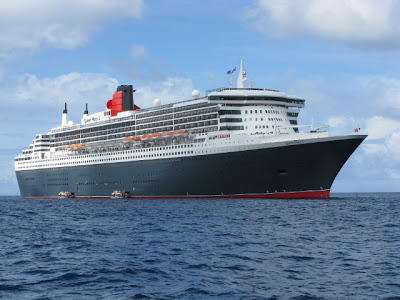 Queen Mary 2 anchored off the port of Castries 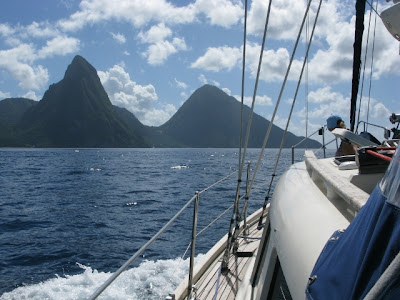 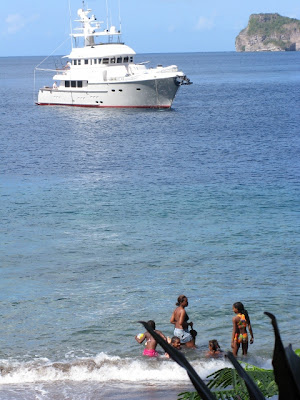 Two cultures not quite meeting 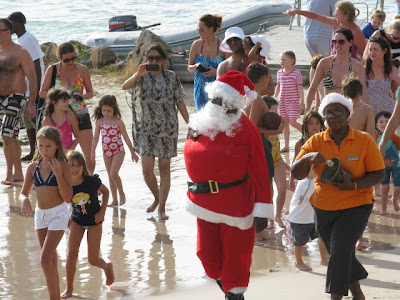