Dominica is the next island north of Martinique; about 30 miles separates the two but the contrast is immense. Dominica is beautiful - with huge volcanic ridges and dense rain forest and has a population of only about 70,000. Of these, 10,000 live in the capital city Roseau towards the south and it was here that we arrived to clear in with customs.

Customs clearance is a new game that will become a big time-wasting element of our life over the next couple of years. Every time we leave a country we need to get an exit clearance and then we have to clear-in at the next destination. This involves filling a form in triplicate (complete with carbon paper, if you can remember that) to be handed in to a very bored Customs officer. The rules on arrival are strict - the yacht must fly the yellow 'Q' flag, together with the country's ensign, and only the skipper may venture ashore to complete the clearance process. If you fail to obtain the correct exit clearance documents then your arrival at the next destination could be met with blank refusal to give you admittance.

So, as we arrived in Roseau on Wednesday evening after a very brisk sail, Graham dinghied ashore and walked the mile or so into the centre to find the customs office. The walk clearly demonstrated the poverty here though everyone he met seemed friendly enough; the shops, such as they are, proved to be very basic. Returning to the comfort of Maunie, there was an opportunity to study the techniques of seine net fishing at close quarters. 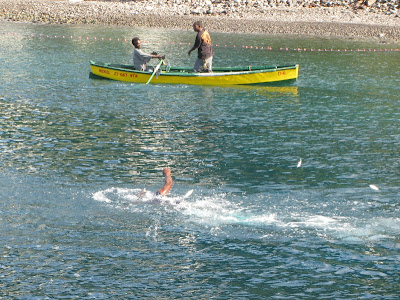 The net is cast and the swimmer makes splashy arm movements to drive the fish into it. A few make a vertical break for freedom 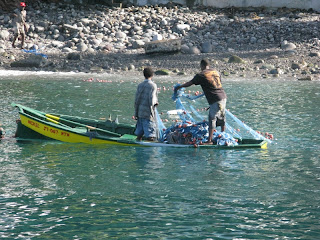 The catch is hauled aboard, with not much freeboard left on the boat!

Yesterday we sailed further north to Portsmouth which has a 2-mile wide bay, not unlike Rodney Bay in Saint Lucia ( but without the hotels and marinas). Dominica has a small airport but it doesn't carry international flights so the kind of mass tourism familiar to most other Caribbean islands is absent here. We met Martin Carrierre, a local guide and boatman who we first saw when he visited Saint Lucia in a commendable effort to try to encourage ARC yachts to visit his island. He sorted out a mooring for us and we arrange to visit the Indian River with him at first light this morning.

The Indian River is pretty atmospheric (it was also used in Pirates of the Caribbean 2 & 3). It's a national park so boats can only go up it under oar power; Martin rowed us up against the current for the 600 m or so that is navigable. It was pretty memorable 600m and we then hiked further into the forest where Martin (a qualified botanist) did a great job of passing on his enthusiasm for this amazing place. The photos don't do justice to it but maybe give you something of the flavour. 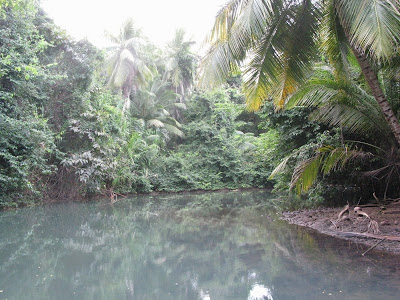 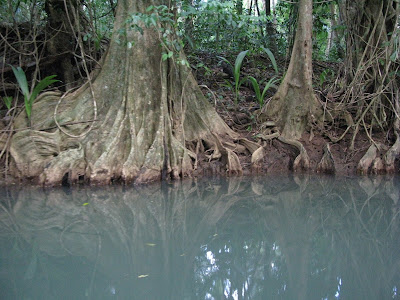 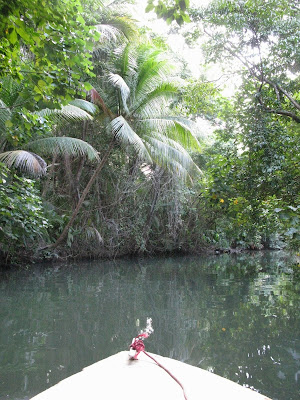 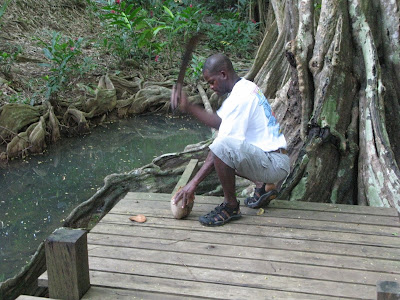 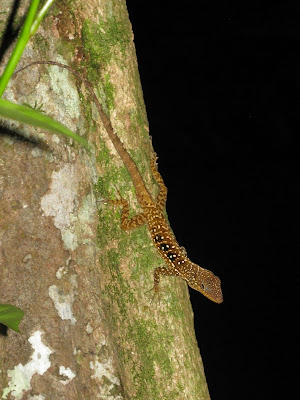 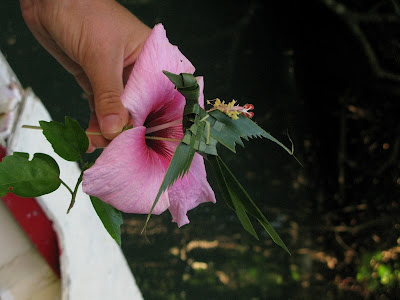 Martin's gift to Dianne - a Hummingbird made from fern leaves

Our river tour completed, Graham had to endure another Customs event to clear out (we're heading back south in the morning) before we went ashore to explore the Cabrits national park which has the remains of the 600-strong Fort Shirley British garrison that was abandoned in 1843. More photos of that to follow.

The plan now is to head back to the southern tip of Martinique to a place called Marin. It's the yachting centre and we'll spend a few days (and lots of Euros, no doubt) on some maintenance jobs on the boat.