What are the chances…….?

Readers of our last update will know that we succeeded in sailing under the Sydney Harbour Bridge on Thursday (this was a thrill for both of us, a bucket list event and included a few tense moments for Di on the helm with ferries approaching from all directions); also we alluded to being spotted as we sailed under the bridge.

Now we all know about the 6 degrees of separation and strange coincidences but we’ve come to the conclusion in the sailing world that there is a much stronger bond that draws us together and very often cats are involved! At the very moment that we sailed under the bridge, one of those bridge walking climbs (for which people pay $270) was being led by a woman called Lily.

That evening when we were anchored in Blackwattle Bay, one of many anchorages further up the river, we heard a knock on the hull and voices. It was Lily, along with her partner Mark, who had spotted Maunie as she cycled home from work to where her boat was anchored. Lily introduced herself: ‘Remember me? We met in 2013 when we came for drinks on board Maunie’. We obviously looked confused so she added some details about Pixel, the cat. Well that clarified things in our heads as we recalled quite clearly meeting up with two boats in Moorea: Duncan & Jess on S/Y Alliance and Charlie, Lily & Pixel on S/Y Portal. Our invitation for them all to join us for drinks on board Maunie had the condition that ship’s cat, Pixel, must be in attendance (having spotted the gorgeous Maine Coon strutting his stuff on deck). You can follow this link to see that Pixel did indeed come across for drinks and it was very difficult to persuade him to disembark from Maunie at the end of the evening: http://maunieofardwall.blogspot.com.au/2013/07/exploring-moorea-and-meeting-pixel.html

Back to the coincidences, Lily happened to lead a climb across the bridge just as we sailed beneath and she actually spotted us and recognised the name of a boat that she’d last seen four years earlier. Later she cycled past our anchorage on the way back to her boat for new partner Mark to pick her up by dinghy at the pontoon near us, as their boat is anchored in the next bay.

First of all, as we sat on the ferry from Darling Harbour to Parramatta to drop off our SSB radio for repair (and do some touristy bits on route) Graham spotted a yacht called Zeena on a mooring, among hundreds of other boats. We first saw Zeena's crew in a restaurant in the Galapagos Islands in 2013 and then the boat plus crew on board in the Marquesas later in the same year when we were all battling against strong river floods and the resultant debris being carried past our boats. Another link from 2013 to 2017!

Finally, when we returned to our anchorage, a new boat had joined the three or four others around us; a Vancouver 34C had dropped its anchor just along from Maunie. As far as we know, there are no connections to 2013 or to cats but what we do know is that there aren’t too many Vancouvers around (and sadly numbers won’t increase as the yard is closed and therefore ceased building our beloved yachts). Maunie was built in 1997 and Nausikaa, the other Vancouver, was built in 2009 by Northshore. Her current owner, Kayo, sails her single-handed and she too has just returned from Tassie. 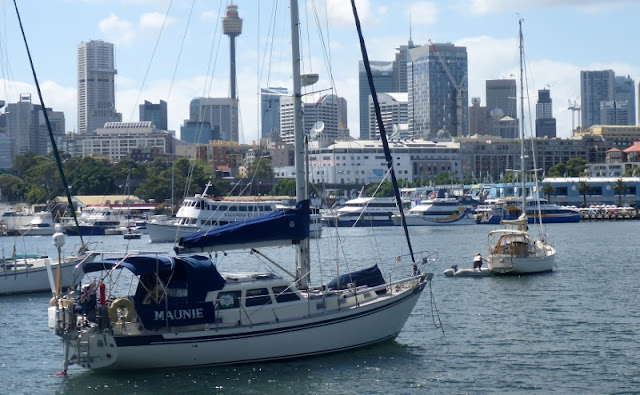 So, once again, we ask: what are the chances of two Vancouver Yachts being anchored in a bay on the opposite side of the world to where they were built?
Posted by Graham and Dianne at 11:11