"Push on, Push on. You can sleep when you're dead" - Capt Barbossa, Pirates of the Caribbean

Well, Miss Brontë, with respect, I suspect that you, living as you did in the land-locked Yorkshire village of Haworth in the mid-1800’s (when it probably wasn’t de-rigeur for Ladies to venture anywhere near sailing boats), never experienced a pillow as restless as the ones on Maunie for the past 3 days.

We are now safely in the fishing town of Bermagui after the 3 day passage from Tassie. Bermagui (pronounced, of course, with a rising inflection at the end) is probably known as Bermie to the locals. It’s an Australian habit to shorten words and give them an ‘”ee” sounding ending (Tassie for instance); we watched the TV news when we first arrived here and were slightly perplexed when the reporter told us that the Firies had attended a nasty car crash somewhere. Firies? What the feck are Firies? Ah, yes, I see: firefighters….

Anyway, where was I? Ah yes, the passage went as well as we could hope for in terms of weather – great sailing for the first 24 hours up the east coast of Tasmania, then 14 hours of motor-sailing through the high pressure ridge, where the wind was just enough to give the engine some assistance, and then excellent broad reaching and running up the SE corner of the mainland. The south-running current was a pain, as expected, flowing at up to 2 knots at times so, in spite of boat speed of around 7 knots (very happy with that) we seemed to be crawling northwards at times against a travellator switched to go the wrong way. The challenge for us, though, was the waves.

The Bass Strait is notorious not only for the wild Roaring Forties winds which can whistle through it if one picks the wrong moment, but also for the confused and uncomfortable seas it delivers as an added benefit to miserable seafarers. It’s shallow, you see, and is subject to sea swells refracting around the top of Tassie, as well as current-driven, short-interval waves. The maritime weather forecasts here give no less than three wave patterns at the same time: the First Swell is the main direction of the big waves, usually from the Southern Ocean, then there’s a Second Swell, often at 90 degrees to the First Swell, and then finally there are the Seas, the wind-driven waves which can often run in an entirely different direction to either of the Swells. So for, example, today’s forecast for the waters here is:

This kind of mix made life interesting aboard Maunie.

“Insomnia is a gross feeder. It will nourish itself on any kind of thinking, including thinking about not thinking” – Clifton Fadiman

For this passage, of course, we didn’t have the luxury of crew to break up the night watches into an eminently-sensible 2 hours on, six hours off arrangement – Suzie and Roald, where were you when we needed you? With just the two of us, we were back to 4 on, 4 off at night which means that, by the time you’ve done a watch handover and got in to bed (and allowing for the need to be up 10 minutes before the next watch), the off watch gives you only three and a half hours to get some sleep.

Oh yes, get some sleep, with the boat bouncing in three directions, the water rushing past the hull beside your head and various creaks, groans and rattles emanating from various parts of the hull. “Must get some sleep, must get some sleep!” you tell yourself but, by then, your mind is churning through all sorts of subjects. I found myself thinking about boat maintenance jobs, the plans of how to leave Maunie safely tied up to the pontoon when we fly home in April, the jobs that need to be done on the cottage when we return and, uh, oh, what was that funny noise just then? “Just stop thinking!!” I tried but, as Mr Fadiman said, that very act seems to require concentration that diverts the mind from the concept of accepting the oblivion of deep sleep.

So we both lived the half-life of sleep deprivation for most of the voyage and it was surprisingly debilitating. It also had some distinctly odd side effects – when we did manage to sleep we woke (or were woken at the end of the too-short off-watch) from that period of sleep that creates maximum dreams. We both refrained from sharing too much detail for fear of scaring the other but Graham did admit to a lurid dream of going to visit our storage unit for our furniture back in Somerset to find it transformed into some kind of subterranean grotto with small but vicious purple-winged bats hanging from the ceiling! To make him feel better, Di shared her dream of visiting various bakeries in an Australian town to check that they each had the right amount of cream cakes; if not, she made sure more were delivered. Ummm?!

Even when awake, the tiredness delivered some odd moments, chief among which is the moment when you Hear the Voices. We should point out at this moment, lest you think we’ve completely lost the plot, that we not alone in Hearing the Voices on board a boat; other sailing friends have admitted it too. It’s still quite disconcerting, though. What happens is that, typically, you are up in the cockpit and from somewhere deep in the boat, you can just hear a noise that sounds just like a conversation but without being quite able to make it out. In the past we have both called down to the off-watch partner, thinking that they were the source but, since that wakes them up from their half-sleep and makes them even more grumpy, we now wait, come below to check that the radio hasn’t suddenly burst into life and then realise that it’s just a pan squeaking against its neighbour in the galley locker and, apparently, saying “honestly, I just don’t know how they cope”.

So, arrival into Bermie was a blessing and we celebrated, Aussie-style, with a Sunday lunch of pie, peas and prosecco. 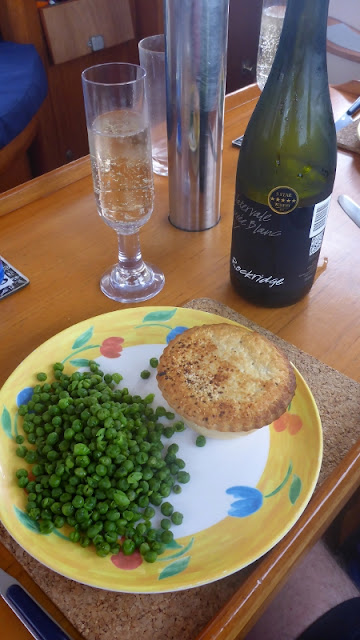 We’re tied up alongside a 60ft fishing vessel undergoing a refit and her crew were very friendly and helpful as we came alongside.

We had planned to head off early this morning to head further up the coast whilst the southerly winds prevail but today’s forecast is for strong winds and big seas so we decided a lie-in and some general recuperation would be more important. At least, that’s what the voices in the galley locker told us, and who are we to argue?