Whilst in Vanuatu, we met Sue and Ian Major when they stayed aboard Sel Citron for a week and they promised to find us a mooring when we arrived in their home port of Pittwater, just 15 miles or so north of Sydney. Well, they not only lent us their own mooring for a couple of days but organised a club mooring for us to borrow for the rest of the week and took us on a car tour of their neighbourhood before a lovely supper at their house in Newport. Fantastic.

There are excellent regular buses down to Sydney from here so we have done two days of sight-seeing to get our bearings before we sail into the fabulous harbour at the end of this week. A few photos, featuring some famous landmarks:

We went on an excellent guided tour of the Opera House so sat in the main opera auditorium (which is about to undergo a $660m refit to address, among other things, the hopelessly-cramped orchestra pit) the bigger concert hall and the three smaller theatres. We just loved the internal shapes and the contrast between the un-painted pre-cast concrete structure and the wooden ceilings


The Opera House 'done' (though we want to come back and see a performance here) we moved on to the Harbour Bridge:

Day two of our sightseeing took advantage of the Sunday deal where you can do as many bus and ferry journeys as you like for just $2.50. We went to the Maritime Museum which, inside, wasn't as good as its superb Auckland counterpart but it has the advantage of some ships to explore in the docks. Dianne overcame her claustrophobia and went into the submarine HMAS Onslow before we moved on to HMAS Vampire, a destroyer built in the 1950's so probably not hugely different to the ship her dad served in. 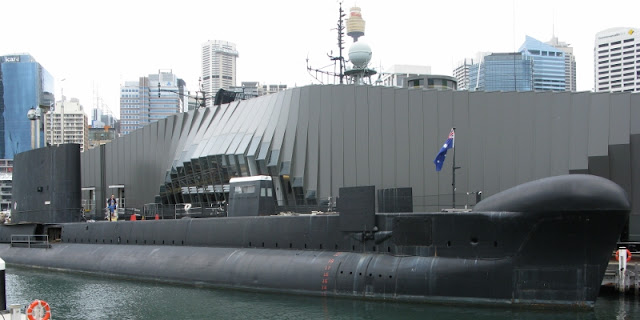 We're now back aboard for a few days - the sight of those monster engines in the submarine prompted Graham to do an oil and filter change on Maunie's diesel today. If the forecast stays as it is, we'll sail down to Sydney on Friday.
Posted by Graham and Dianne at 08:25