Some of you may be new to this blog so, with apologies to regular viewer, we thought we should recap a little as well as giving you a bit of an overview of what we plan to do this autumn. The blog has quite a lot of history so you can scroll back in time if you wish!

Anyway, as you’ll probably know by now, we're taking a career break to go ‘blue water’ sailing, after 13 years at Yeo Valley for Graham and five years running Wavelength HR for Dianne. Having sailed around Britain a few years ago, we have been thinking about this for a while and the dream began to crystallise into reality about 3 years ago. We bought our boat, ‘Maunie of Ardwall’, as a restoration project – she’d been left unused and unloved for several years following the death of her first owner so we got her at a ‘bargain price’ (perhaps less of a bargain if we work out how many hours we’ve spent fixing her up!) – and she’s the perfect yacht for two of us to handle. This is an outline of what we plan to do.


Our first goal is to sail to the Canaries, 1350 miles from Falmouth across the infamous Bay of Biscay, with stops en-route in Spain and Portugal. We need to be there by early-November, which is when the trade winds kick in to take us across the Atlantic, so we aim to leave the UK before the end of August to reduce the risk of gales across Biscay. Mind you, with the current weather patterns who knows what the weather will do!

For safety and shared knowledge, we’ve signed up on the Atlantic Rally for Cruisers (ARC) which has been running for a number of years. This year a record 270 boats will be setting off from Las Palmas to St Lucia on the 25th November.
Click here for the ARC website
With the ARC comes lots of support – daily weather forecasts and safety reporting, shared technical knowledge and a few parties at the finish. It should be a good introduction to crossing the ocean – which should take about 21-24 days for a boat of our size (and we’ll be on the smaller end of the scale; the average boat size is nearly 50ft). Two friends, Fergus McDonald and Richard Fetherston, both experienced sailors, are going to join us for the crossing which will make life much easier in terms of night watches and sail trimming. You’ll be able to follow us on the ARC website since each boat is given a ‘Yellowbrick’ – an automated satellite transponder which sends hourly reports of position, speed and course to the web tracker. More generally, whilst we’re away we will have email access via a clever satellite phone and share details of that nearer the time; it will allow us to upload the boat blog and to send photos.

Once we get to the Caribbean for Christmas (sounds nice), we broadly have two options:

1. Spend 4 months exploring the Caribbean then head north in April (to avoid the hurricane season) and return to Europe via the Azores. This would be a 12-month adventure

2. Leave the Caribbean in February, transit the Panama Canal and head for the Pacific for a circumnavigation. The route would look something like this: 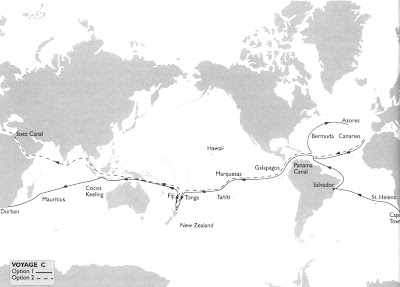 Broad timings would be to arrive in New Zealand in November 2013, to spend 4 months there to avoid the cyclone season to the north. Depart March 2014 and aim to be in South Africa by November 2014, on to the Caribbean (probably via Brazil) in April 2015, back home via the Azores in August 2015.

The timings are all pretty prescribed to take advantage of the prevailing trade winds and currents. We can’t use the old ‘short cut’ via the Suez Canal and the Med due to the political situation and our route via Mauritius would keep us well away from the Somali pirates! It does add almost 6,000 miles to the trip, though.

Our choice of option will depend on how we feel about the life on board after a few months – we’d like to go for the circumnavigation option but we’ll see how things progress.

In the meantime, as you’ll imagine, we’ve still got a lot to do in a very short time but we've made good progress so far. Di’s completed her 9 day medical course so is very eager to apply ointment and sutures. Graham’s been to the World Cruising Club’s 3-day Blue Water symposium (which has added to the to-do lists) and has completed his Long Range Radio Certificate. We’ve both done an Ocean Safety training course in April and are busy updating all the safety kit on board. As you'll read elsewhere in the blog, we've installed a water maker and a satellite phone.