A Hellish Day in Paradise


We know, you're probably thinking that we are having a wonderful time in a Polynesian paradise but today was pretty much a day from hell.

It started with a night of continuous heavy rain which became torrential this morning. Well we've spent enough time in Galloway (SW Scotland) to be able to cope with a wet day and, indeed, turned it to advantage; we blocked up the scupper drains on the deck and opened the water tank filler cap and, within 15 minutes, had the main tank brim full of fresh rainwater. We know when the tank is full because the hand-pump in the galley starts to spew water into the sink -  this is better than our new friends on the New Zealand boat Liberty 6 who say they know the same when their floorboards start floating!

Liberty, by the way, were pretty close to us on the passage from Galapagos and said they really enjoyed the daily banter between Maunie and Stormvogel on the VHF - they tried to call us but we didn't receive their transmissions;they said they felt that they knew us pretty well by the end of the voyage!

Anyway, back to the events of today. The water in the anchorage turned a deep muddy brown and then, at about 10.00am, we had a call from Peter on Stormvogel: "Have you seen what the **** is coming towards us?!!". The little stream at the head of the bay had become a raging torrent and all sorts of debris was flooding into the anchorage, starting with coconuts and little bits of wood. Soon, though, whole trees and bushes were floating towards the anchored boats on an increasingly fast current. Peter came to collect Graham in his dinghy and for the next two hours they, and the crews of several other boats, battled with the elements (still in torrential rain) to try to drag huge rafts of wood and greenery away from the boats. 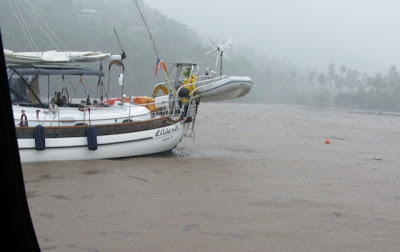 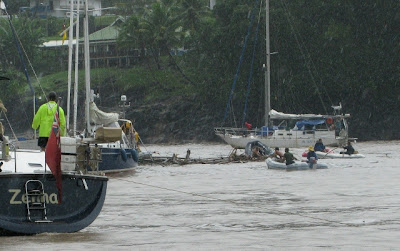 Fighting to clear the log-jam from Stormvogel


Maunie was well placed out of the direct line of attack but Stormvogel at one stage had large logs pressing against her, threatening to drive her onto the nearest boat. Eventually the combined efforts of the crews cleared the mess, which floated out of the harbour but we discovered that Stormvogel's Hydrovane wind-vane steering system (aka Trudi) had been damaged; an hour later Peter and Graham had managed to remove a mangled stainless steel pin to return the rudder to a more normal angle than the 90 degrees to the fore-and-aft that it had adopted. Thank goodness this all happened in daylight as it would have been devastating at night.

As the weather at last began to improve after lunch, we walked into the village (Dianne staying aboard to keep watch and to bake an excellent cake) to find that the chaos of the anchorage was nothing compared to that of the the village centre. The flash flood had brough huge amounts of debris down the river so there were two diggers pulling  boulders and logs from under the blocked bridge and the surrounding buildings had a 1 metre high tideline. We got the impression that this isn't an unusual occurrence here and the locals were stoical in the face of conditions that would make the national news at home.

We returned, laden with provisions from the supermarket, in a 4x4 'taxi' which tackled the rock-strewn roads with gusto and then did a fuel run to refill Stormvogel's tanks before returning, exhausted, to our respective boats. Tomorrow morning, we'll complete a couple more dinghy runs to the fuel station and then get the hell out of here!