The view of Fort de France from our anchorage

Martinique is a very green island and we have discovered why - we're getting lots of rain so life on board alternates between the hatches-open hot sunshine and the hatches-shut sauna conditions when the rain arrives. We're not complaining, though!

Today we had a very pleasant 10 mile sail north up the west coast of the  island to anchor off the beach at Saint Pierre. En route we crossed paths with about 30 dolphins, apparently engaged on a fishing mission as they ignored us completely. Until 1902 St Pierre was the island's capital until the ancient volcano above it erupted; warnings were ignored and the Governor of the island even moved his family to the town to allay fears. All but 4 of the 30,000 inhabitants were killed when the hot gas from the mountain hit the town and the 12 ships at anchor in the bay still remain as wrecks.

With the amazing optimism of people who live in the shadow of volcanos, the town has been rebuilt, though on a much smaller scale, but the remains of its former splendour serve to remind its current occupants of the risks they take in living here.

The entrance steps and ground floor of the once-grand theatre are still very visible, with even some of the electrical transformers for the lighting remaining, 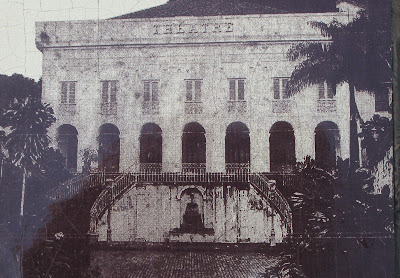 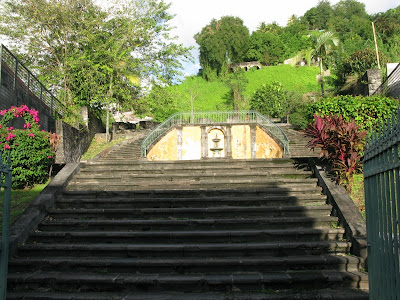 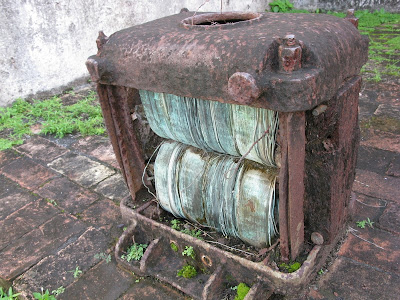 Meanwhile next door the ruins of the town jail tell a sad story. Only one inmate survived the eruption, protected from the murderous gas and flames by the thick walls of his cell; he went on to become famous, telling the story of the cries of his fellow citizens as they perished. 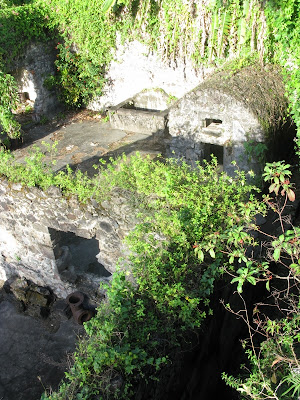 On a more positive note, the black sand beach and the forest behind it are strikingly beautiful and, as evening fell, we were bathed in a lovely warm light on the anchorage. We continue to pinch ourselves that we are here! We'll stay here tomorrow to explore further.

The availability of wifi is still pretty limited here. We found the recommended internet cafe but our enquiries of network availability were met with a Gallic shrug. "It is broken" explained the proprietor and, when asked when it would be fixed, he explained, "This is Martinique - could be a day, could be a week!" We found somewhere eventually.