British remnants on Dominica and back to Martinique

Dominica changed hands from France to Britain peacefully but only after lots of colonial tensions. At the north end of the island, the British built a 600-man garrison to ward off French attacks (Guadalupe is only 30 miles to the north) and Fort Shirley must have been quite a set-up, with gun emplacements on the two hills, East and West Cabrits. The fort was abandoned in 1845 and left for the forest to reclaim it; about 20 years ago it was designated a national park and work began to protect and rebuild some of the main fort buildings. It makes for a fascinating walk. 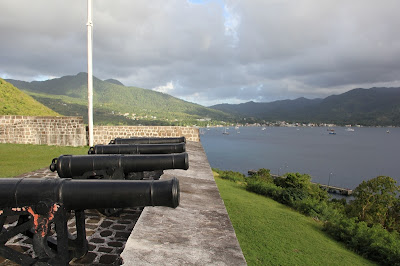 The guns overlooking our anchorage 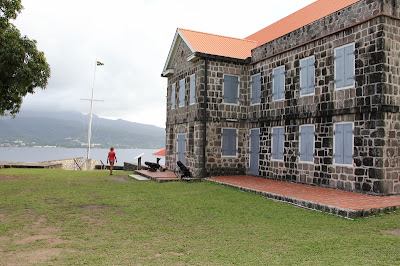 We hiked up West Cabrits hill, through dense forest, and arrived at the crumbling remains of the West Battery perched precariously at the top of a 300ft cliff. The remaining canon (how did they get it up there?) doesn't look as though it'll be there much longer! 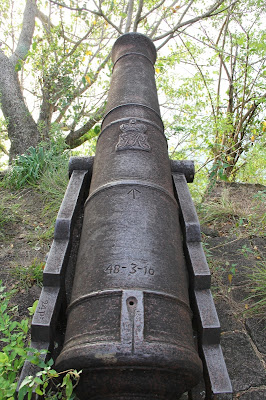 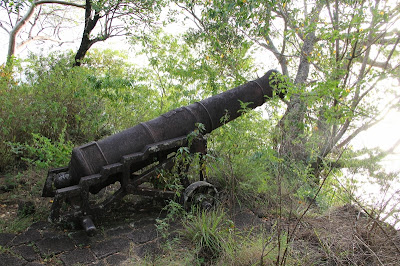 On Friday we sailed back to Martinique and were lucky to have a glimpse of the volcano that destroyed St Pierre as the usual cloud cover parted briefly: 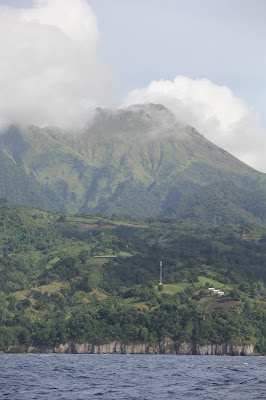 We are now in Marin at the very southern end of Martinique. It's an incredibly busy yachting centre with a huge marina and many hundreds of boats anchored in the sheltered harbour. We were lucky to get a space in the marina and will be here for 10 days or so to do some Serious Boat Work.

The wear and tear on a yacht crossing the Atlantic is more than most boats will encounter in a whole season and, of course, we are now in hot sunshine so the degrading effects of UV light are even more pronounced. We also have learned about some of the challenges of operating Maunie in tropical conditions; in particular the fridges have to work really hard and consume lots of electricity. Marin has lots of boat engineers and suppliers used to dealing with these issues (several charter companies are based here) so we have decided work here to do some maintenance and make some changes.

The big (and expensive) projects are to convert the air-cooled fridge to a sea-water cooled system (which will cut its power consumption in half) and (if we can organise the contractors to a reasonable timescale) to have a stainless steel frame built over the cockpit to carry two 100W solar panels. If all goes to plan the combination of these two jobs will make us much less reliant on the diesel generator. We will also have Maunie lifted out onto the hard for a few days so that we can do a few winter jobs below the waterline - mainly doing the annual maintenance on the folding propeller and changing the sacrificial anodes which protect the expensive bits of the boat from corrosion. Meanwhile the sewing machine has been earning its keep again, with some running repairs to our sprayhood and dinghy cover, both of whose stitching was beginning to come apart because of UV degradation.

In between all the work we'll hope to hire a car and explore some of the rugged eastern side of the island. We'll upload some photos...
Posted by Graham and Dianne at 01:41