'We'd have got away with it, if it hadn't been for you pesky sailors!' The Maunie crew foils a major burglary

The rapidly-escalating news of the pandemic dominates everything at the moment but it seems that some people are continuing with their normal activities as though nothing has changed. Burglars, for example.

We came down to Maunie at the Baltic Wharf yard on Friday to do a few jobs (more on these below), ready for the mast to be re-stepped on the Monday, so we slept aboard. Early hours of Sunday at 03.00 we woke to hear the clank of someone climbing up the aluminium ladder onto our boat, which came as quite a rude awakening, as you'll imagine! Whoever it was climbed up to remove the rope lashing the top of the ladder to Maunie's rail, we later realised. Graham immediately went up into the cockpit and could see lights from a couple of torches below us in the otherwise pitch-black and our ladder was being carried towards the back of the storage shed. When he shouted, the two people in the shadows dropped the ladder and ran off so, having realised it was more than someone just mucking about, we called the police.

Once the two officers, plus dog, arrived at about 03.40 they put the ladder back, so that Graham could climb down, and we then found a substantial pile of power tools, plus three outboard engines at the back of the shed beside a hole made in the back wall. We think that the burglars were planning to use our ladder to make a bridge across the ditch behind the building so they could transfer their loot to a waiting vehicle. They were very unlucky (or stupid) to choose the ladder belonging to the only occupied boat!

The police dog followed the scent to the workshop of Dave Sharp (who did our paint repair) and Graham walked around the yard with police but there were no more scent trails for the dog to follow. We contacted Dave and the boatyard team and they came in early on Sunday morning; Dave identified that all the tools (several thousand of pounds' worth) were from his locked tool store, where the padlocks had been cut, and the engines belonged to his customers. Thankfully, we scared the thieves off and they got away with nothing at all for their trouble so they had a night of wasted effort and a good scare. Mind you we had a good scare, too, and didn't get to sleep again once the police left at 05.00.

Investigations are ongoing and CCTV footage is being studied - we were very impressed by the response from the nightshift police and from the dayshift team who followed it up on Sunday. However, they warned that the thieves would probably have another go, so they urged all boat owners to be vigilant and to increase their security precautions; the yard has already upgraded its security arrangements.

Apart from that little excitement, we had a typically busy few days on boat jobs as we took advantage of having Maunie under cover for the long weekend (to let her new paint harden). So, we did some more varnishing, re-sealed a couple of deck fittings that we weren't completely happy with and replaced the navigation light power cables in the mast. The latter job is a 'curse of the engineer' one - something that most boat owners wouldn't even think about but Graham couldn't ignore. We'd replaced the masthead light fitting last year and, upon wiring it up, discovered that the copper wire in the cable was black rather than shiny copper.


As the last photo shows, we AT LAST had a sunny and calm day on Monday so this was the ideal time to re-step the mast and refit the solar panel arch. There's another short time-lapse video of the process - click on this link: VIDEO

Out in the sunshine, the paint repair is nothing short of amazing. It's absolutely impossible to see where the damage was on the bow. Andy the painter and the team at Baltic Wharf Repairs have done a fantastic job. Here are the before and after photos.

We are absolutely determined to protect the paint from any more scratches so have made protector covers to go over the shackles on the mooring lines and we got the sewing machine out to make new anti-scratch fender covers. 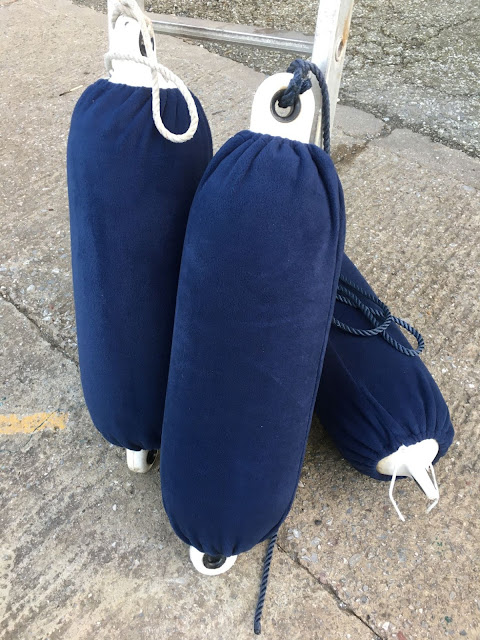 Now we are just waiting for a set of seals to be delivered this week, so that we can refit the engine water pump, and then for the first suitably-high tides, next week to relaunch. We're just wondering what movement restrictions there might be in place by then..... Fingers are crossed.
Posted by Graham and Dianne at 15:55