The final Aussie sail - and where's Bob Diamond when you need him?

Monday was a slightly emotional day, as we made our final Australian sail up to Newcastle. The southerly breeze was from a helpful direction but was slightly lighter than forecast so, unfortunately, we had to motor-sail most of the 55 nm in cloudy conditions, passing a long line of coal and ore freighters anchored and awaiting their turn to enter the port.


So, we are now into a new phase - getting Maunie stripped down ready for the ship (which is now delayed a couple of days, again, to the 18th) and getting on with some maintenance jobs. We're tackling things that are time-consuming and not necessarily much fun but need to be done so that when we get back to Dartmouth we can enjoy the boat (just at weekends, of course) without losing time to maintenance. Mind you, the latest task had Graham wishing he could summon up the help of his imaginary plumber; if you were following the blog way back in August 2013, you'd have met him in the mid-Pacific:

Bob Diamond (the plumber, not the banker) was overweight, fifty and looked slightly disheveled and sweaty after the journey. "Blimey, you took some finding out here! Got lost three times an' 'ad to stop fer directions twice!" he said in a strong south-London accent, mopping his brow with a red handkerchief and flashing the gold-toothed smile of a man who knows that all mileage will be recharged at an exhorbitant rate. He took a sip from his mug of tea ("Three sugars, luv, ta") and handed over his card as way of introduction:

Plumb Bob Ltd
Plumbers and Heating Engineers
Bob Diamond I.G.M.O.V.
Proprietor
He chuckled at my quizzical look. "Mate o' mine said it looks better if you 'ave letters after yer name. Stands for 'I got me own van' but most people don't ask."

If you missed it, the full story is here.

So the challenge this time was one that all sailors dread - replacing the hoses for the heads (sea toilet). The last time we did this was about 9 years ago (and our mate Rich Fetherston gamely helped out) but, over time, the bores of the 38mm diameter 'poo pipes' slowly get encrusted with a coating of hard scale (something to do with urea and seawater) which reduces their internal size. Of course, being a boat, it's not an easy task to remove the old pipes and add the new and, since this was the aft heads, it involved a lot of time in the cockpit locker to access the connections.


The challenge of replacing the pipes and connecting up the new ones in the locker would have certainly had Bob exclaiming, "Strewth! Oo done this plumbing? Right old cowboy job I'd say." Then, to himself, "Terrible access – ow you s'posed to get yer 'and in there?"

The aft heads has the additional complication of a holding tank, to allow it to be used in harbour without polluting the water - the tank is then pumped out at sea or its contents vacuumed out at a pump-out station in a marina. It makes for some pretty convoluted plumbing: 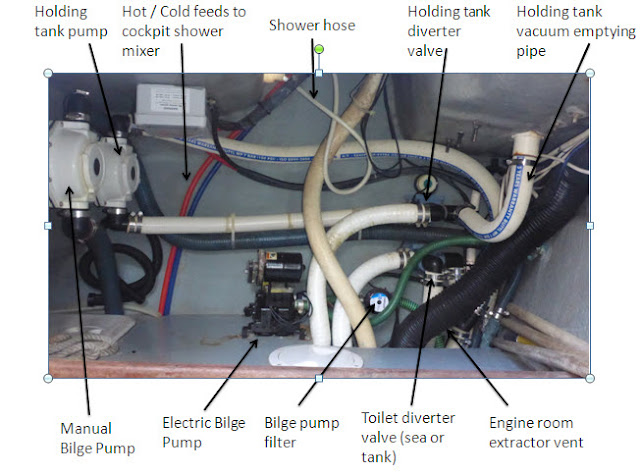 For any sailors reading this and contemplating a similar project, I can wholeheartedly confirm Adam's (from Bravo) recommendation of using the more-than-twice-the-price butyl low-odour hose; it's so much more flexible and easy to connect than the normal plastic hoses whic can be a nightmare to fit. 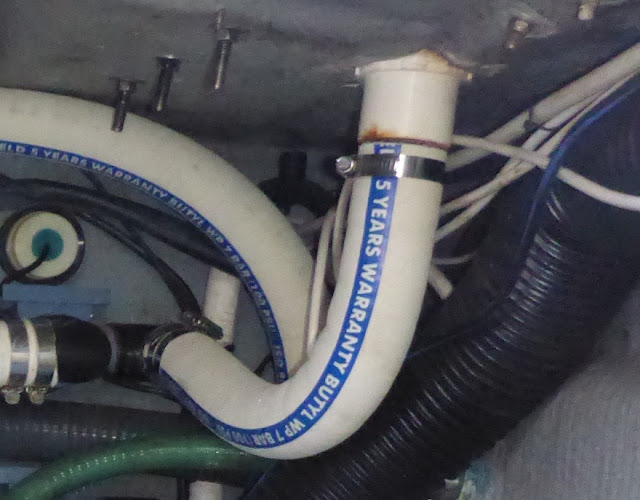 So, thankfully, that job is now done but the to-do list is still pretty long. So far the generator's been serviced, the toilet pumps overhauled, the cooker has had a deep clean, the sails are removed and are being serviced at the local sailmakers, the lifejackets have been washed and serviced and the halyards have been pulled out of the mast and replaced with mousing lines.


We have another 8 days to go (assuming that the ship isn't delayed any further) so should get everything done. We'll plan some time to explore the town as well.
Posted by Graham and Dianne at 22:18