Hello from Sydney Harbour, where we have been exploring some of the more remote corners of this huge waterway - mainly to find shelter from a southerly gale over the past week which brought 5m swells up the coast. When we did return to the main harbour a couple of days ago, the seas were still pretty impressive so we certainly wouldn't have wanted to venture outside the Heads. The big ferries were doing their heavy-weather route to try to avoid side-on waves that would have made them roll even more: 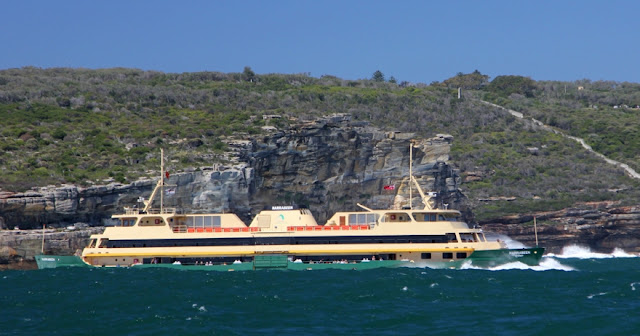 We are now anchored close to Manly Beach but just off a quieter swimmers' beach, with a stern anchor holding us close to the shore and with the light wind blowing from our port beam. We like this trick as the wind keeps a steady pressure on the mast and rigging which reduces Maunie's tendency to roll when the wakes from the ferries reach us.


While we have been here we had a superb bbq with Sue, Adam and Cindi at the house in Manly where Kerry is looking after Dennis, the energetic dog:

The lunch party served also as a farewell to Adam and Cindi who set sail yesterday morning to head to Tasmania. We first met them on the SSB radio net about four years ago and then in person in Savusavu, Fiji and they have become great friends so we were sorry to see them leave, particularly as we had originally planned to be sailing to Tassie with them. 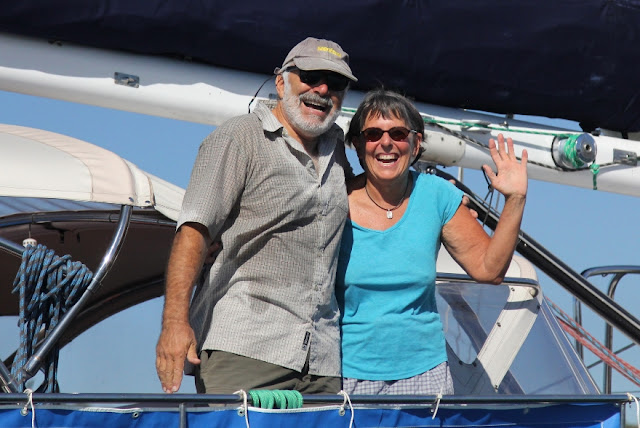 So, patient reader, this brings us on to our latest change of plan. The long-termers among you will know that our plans have become more like guidelines by now and that our original, rather naive, idea of completing a circumnavigation in 3 years was binned as soon as we arrived in the Pacific. After returning to England, for Graham to start working for Thatchers Cider for 5 months and Di to salvage the garden, this (northern hemisphere) summer, we decided to repeat the process in 2018 and go back for another six-month stint in May. However Graham has been offered a full-time role at Thatchers - the new role of Supply Chain Director - and it's just too good an opportunity to turn down, so our plans have been re-written again.


The logistical challenge of having Maunie in Australia led us to consider selling her here (but that would involve importing her into Australia first and paying 15% of her value as tax, plus the not-insignificant issue of shipping our personal belongings back home) but the additional significant emotional ties to her quickly had us discount that option. Instead we’ve found a company which will ship her from Newcastle (just north of Sydney) to Southampton, via NZ, Tahiti, Panama and Florida so almost retracing her outbound route) with about 20 other yachts on the deck of a specialist freighter. It’s an expensive trip but, considering the running and maintenance costs of the 18 month sail back via South Africa, not prohibitively so and we are lucky with the timings since it only runs once a year.
So we will load Maunie onto the ship in early March for the 8-week voyage home and then have a month or so of land-travel in Australia before we fly back on the 17th April. We'll meet Maunie in Southampton, re-rig her (we have to remove all the sails, canvas covers and running rigging before the shipping) and sail her back to Dartmouth before Graham starts work at the beginning of June. Oh, and we'll have to move back home, unpack all of our belongings, buy a car for Dianne and generally get ready for some serious work that doesn't involve boat maintenance on a daily basis!

We're of course disappointed that we won't be completing our circumnavigation but we have benefited from three wonderful bonus years aboard Maunie in some amazing places, so we really can't complain! Our return will also give us the time (and the money, of course) to do a bit of a refit on the boat. Maunie is 20 years old with 45,000 nm on her log so it'll be great to treat her to bit of serious tlc, the sort of work that would be impossible while we are living aboard. Re-varnishing the interior, replacing the teak decks (but not with teak!) and repainting her are the three big jobs on the list.

We'll make the most of our remaining few weeks of sailing in Australia and look forward to sailing into the beautiful River Dart in May.