Flying the spinnaker, sealing a leak, laying a new deck and enjoying a different drink

The title of this update might make you think that we've suddenly teleported back to Maunie but, no, we are still back in the UK and adjusting to life on land. With the terrible news of the terrorist attacks in Manchester and now London dominating the media, it's taking some adjusting to. There is enough written and spoken elsewhere so we won't dwell on the subject here, save to say that in our 5 years of travel to some often remote places we have found that 99.9% of the people we have met were good, kind and decent; the radicalised hate-mongers responsible for the senseless killing don't represent anyone but themselves.

On a lighter note, then, here's a bit of an update on the last few weeks to explain the title. The spinnaker-flying bit was up in Galloway, south-west Scotland, where we got to sail with Graham's dad, Geoff, in his new boat (and to celebrate his 80th birthday of course; we hope we'll still be buying new boats when we're 80!).

The estuary of the River Fleet is where Graham learned to sail at the age of 6; traditionalists might point out the wisdom of Geoff learning to sail first before teaching Graham but they sailed, and sometimes swam, together and, 47 years later, they still demonstrate the almost telepathic communication technique that they use when sailing together:

Other crew on board find this mildly disconcerting.

The boat lives on a drying mooring (annual cost £40 a year!!) and in the photo above, Ardwall Isle (after which Maunie of Ardwall is named) is just visible in the distance.

After a great party and a second sail in rather bleak but fast sailing conditions, we drove back down to Somerset, with a stop-off at Di's sisters in Holmes Chapel, to continue with the long list of jobs on the house and in the garden. The latter was a priority whilst we had a few days of lovely sunshine and an unusual easterly breeze to allow us to build the mother of all bonfires to clear all the branches and weeds (and, incidentally, to create a minor but heart-stopping bushfire through a huge area of brambles. Well, they needed clearing!).


As the weather changed we moved into indoor jobs and the biggest was to tackle a large patch of damp in the shower room downstairs - the plaster and the wooden boxing around the pipes looked awful and, of course, tenants don't have the same kind of "I'll just investigate the cause of that" mentality as home-owners do. So, we stripped away the sodden wood and were shocked to find a pool of water under the shower tray - the cause was simple, the seal at the bottom of the tiles had failed, but it was quite a job to fix.


Finally, this weekend we progressed onto the new deck (something we've worked hard to avoid fitting on Maunie by replacing all the sealant on her deck). We plan to pair down all of our goods and chattels this summer so that when we return to Maunie in November, we can store them all at the house. The plan is to partition the garage to turn it into a workshop / store for our tenants whilst giving us enough space for our furniture and the things we really need to keep. Stage one was to build a deck on the joists of the pitched roof so that we could get some useful space for boxes and bags:


These big projects now have to be shoe-horned into weekends because Graham has just started a new job! He's working for a family-run cider business for 4 months as a project manager to help with a big expansion plan. His first week has been taken up with introductions and a full induction, which included a day as a delivery-driver's assistant on Friday.

The focus on house re-decorating and ongoing gardening now falls to Dianne, so it looks as though we'll both be pretty busy for a while! 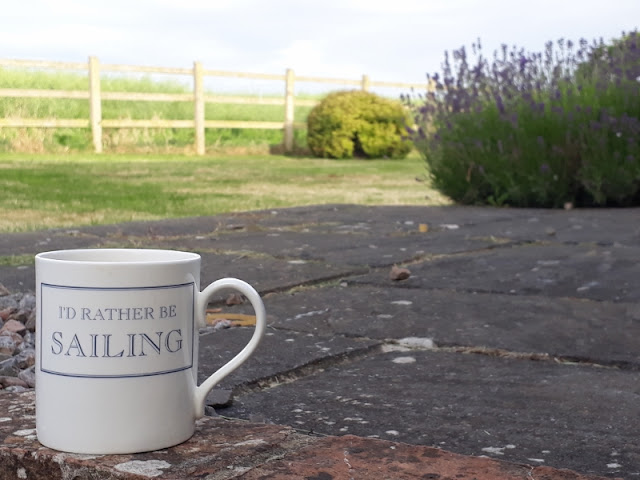