We have broken the long haul back to England with a three-night stopover in Dubai (a mere 13 hours' flying time from Brisbane, which is about 11 hours too long, according to Graham). If we're honest, it's not a location that would have naturally appealed to us but we are very fortunate that Lucy and Anthony, who live here, were generous enough to welcome us to stay. Graham grew up with Lucy during summer and Easter holidays in Galloway, south-west Scotland, but, since we haven't seen them for nearly 20 years, we were stretching the rather tenuous 'old friends' link rather. However they have been wonderfully welcoming, have shown us some of the sights of the city and even managed to get an extended invitation for us to join them at a house party on the super-smart Palm artificial island.

In the 14 or so years that they have been here, Dubai has changed beyond all recognition with huge clusters of sky-scrapers, including the world's tallest building, built on what was desert when they first arrived. However, some of the old town near The Creek still remains so Anthony took us to see it (in temperatures of about 36 degrees!) on Friday and it was truly fascinating. A few photos follow:

The surprisingly large fleet of wooden dhows unloading at the quay carry about 1.7 million tonnes of cargo every year, linking the city to ports in Iran, Iraq, Oman, India, Yemen, Somalia and Sudan. Mostly built of heavy teak planks, the larger boats can weigh up to 500 tonnes and all are loaded by hand; the cargoes we saw included refrigerators, air conditioners, truck tyres and even jet-skis but the boats themselves look as though they haven't changed in centuries, apart from the diesel engines which have replaced the traditional lateen sailing rigs. 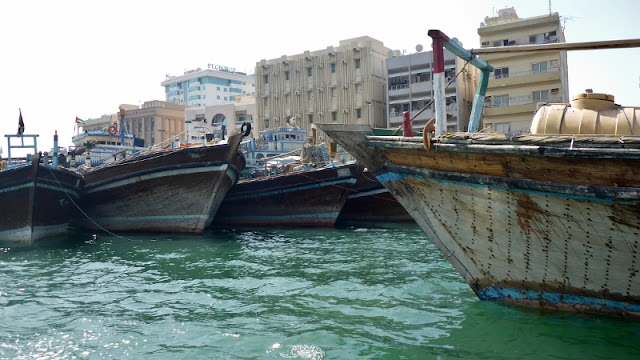 A short walk from the quay took us to the Spice and Gold Souks - rabbit-warren streets lined with tiny shops whose traders all wanted to persuade us to come inside for their 'best prices'. Meanwhile on the streets there were more men showing us their 'Rolex' and other fake-brand watches. 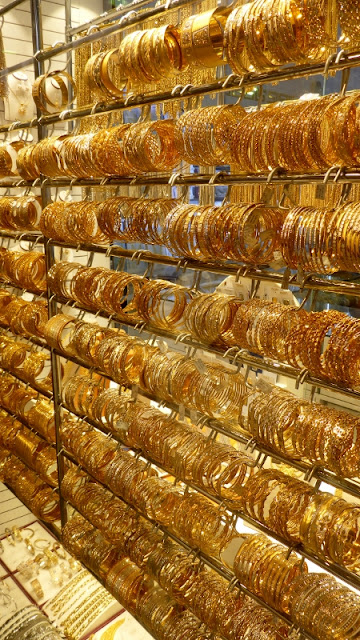 Crossing the Creek in an abra we walked up to the house that once belonged to Sheikh Saeed bin Maktoum Al-Maktoum, who was the leader of Dubai until his death in 1958. The courtyard building was constructed in 1896 and is dominated by four 'barjeels' - wind-towers that directed the cooling sea breezes through the house long before electric air-conditioners, without which Dubai city could not now survive. It's now a museum, containing some wonderful photographs from the mid 1900's when Dubai city was no more than a tiny port town of traditional buildings constructed of stone and date-palm wood.

We drove back along the beach-front as Anthony was keen for us to see the racing dhows that had just returned from the first days of a two-day regatta. These beautiful boats are 22ft, 43ft and 60ft long, with two masts and professional crews; it's a fiercely-contested sport of the very wealthy and is open only to locals. We passed a boatyard where one of the 60ft monsters was being rigged: 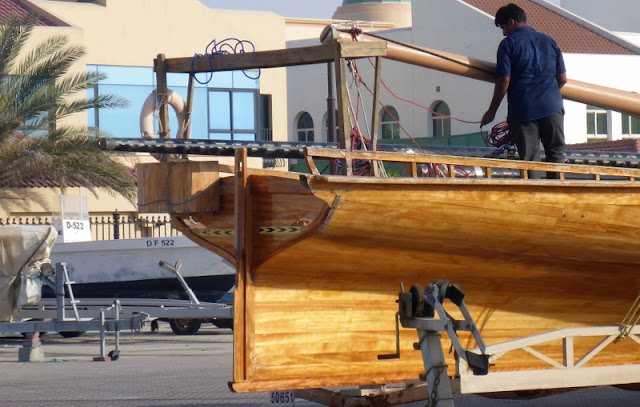 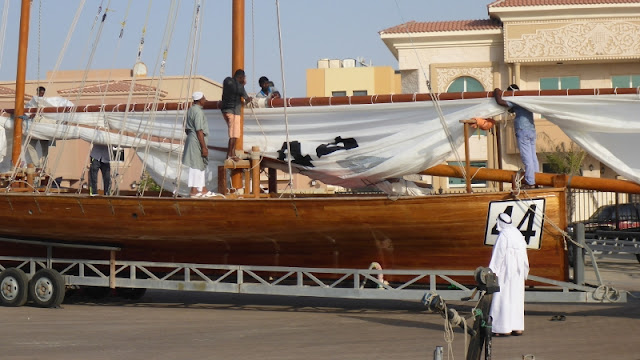 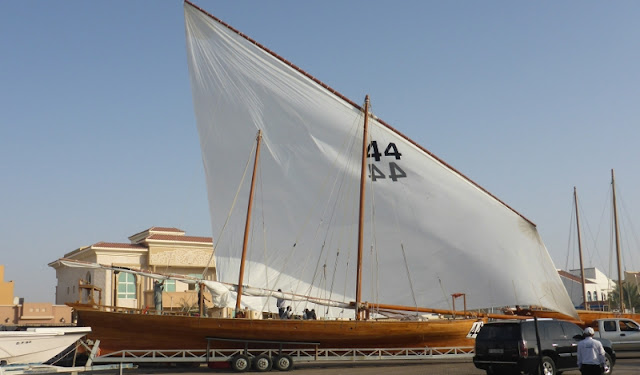 Here's a link to a photo of one of these amazing boats under sail: http://www.adsyc.ae/en/pic_gallery.php?aid=113#prettyPhoto[gallery1]/21/

So this was a great day to introduce us to 'old' Dubai as a primer for our explorations the following day into the new parts of town. Photos of that to follow soon!
Posted by Graham and Dianne at 12:05