Learning Something New Every Day

One of the highlights of this sailing life is experiencing different things wherever we go. That’s certainly the case on Maunie.

As we explore the delights of Jervis Bay, we appreciate the fact that it’s managed to avoid development mainly as a result of 28 square miles of its shores being transferred to the Commonwealth Government from the NSW Government. This was when Canberra became the capital city and required access to the sea! The Aussie Naval College was built here then transferred to Victoria and before returning to Jervis Bay in 1956. Thankfully as a result of this and a few other reasons the Bay has avoided heavy industry.

While we await a decent weather window to sail down to Eden, we’ve experienced several changes of wind direction over the past few days. Consequently we’ve had to do the 'Jervis Bay Shuffle' to get to a sheltered anchorage / mooring spot.  This isn’t a hardship as we see (and learn) things as we go...

…take yesterday for example:  We were motor sailing up the Bay and I noticed two yellow markers. When I asked Graham what he thought they were for, his reply was along the lines of, “well, you either know it or you don’t”. Now I’m not totally gullible and over the years have become wary of that kind of reply, trying not to walk straight into it – hook, line and sinker! He pointed out an unusual rectangle of submarine cables on the chart and went on to talk about ship degaussing. 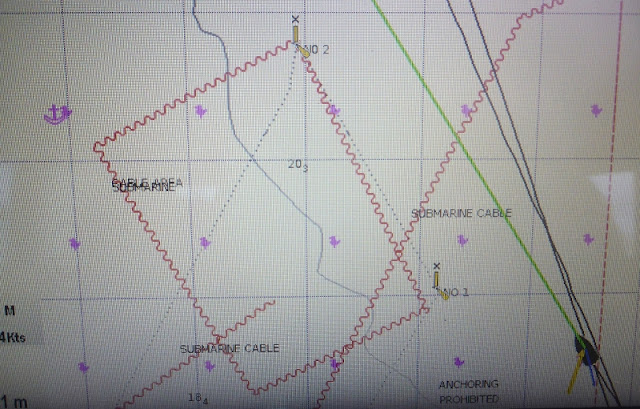 Have you heard of that? (Whilst I vaguely recall some process linked to computers, in the positively ancient. pre-LCD days of CRT displays, I hadn’t but maybe that’s because I didn’t pay much attention in Physics classes. Well, in case you’d like to know too, ship degaussing involves a process to demagnetize a ship's hull by producing an opposing magnetic field to make the ship undetectable to magnetic mines. In WWII this was particularly a problem and they installed a degaussing system of heavy current-carrying cables on board the vessel itself. Since then, a more effective and cheaper system has been developed with a submarine cable laid out in a large rectangle/ parallelogram, the ship motors over the area, the magnetic field is activated and the job’s  done. Only thing is that you don’t want to be in the vicinity when this is activated as all Maunie’s instruments would probablygo haywire to say the least. Back to the yellow markers – they signified the corners of such an area and we could see the markers for the submarine cable on shore. There’s very little naval presence in this Bay at the moment however plenty of ships were up in Sydney Harbour and they may well remain there for Australia Day later this month.

As mentioned, Jervis Bay is beautiful and fairly undeveloped so here are a few images to illustrate: