Becoming a Bum (for a few days only)

We're anchored in the Marine Stadium, just north of Southport on the Gold Coast. Mention that name to local boaters and they'll look confused for a moment and then say, "Yea, right, ya mean Bums' Bay?". 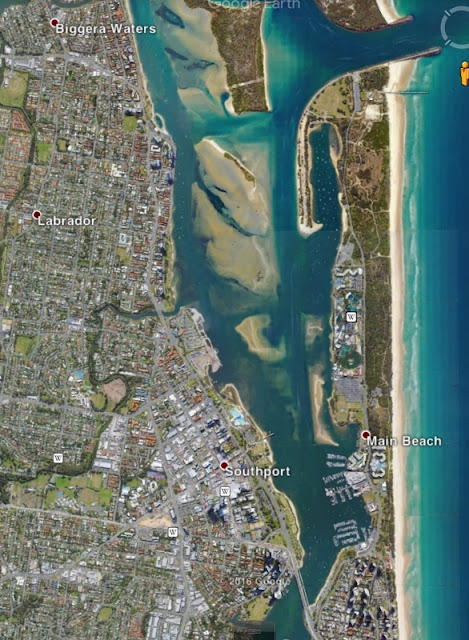 When the Gold Coast Seaway (at the top right of the photo above) was constructed in the 1980's to create a safer, all tide access from the Broadwater out to the sea, the excavated sand was used to make Wavebreak Island to the west of the opening and the Marine Stadium was built just to the south on The Spit. It wasn't designed to be an anchorage but soon became a haven for live-aboards on a variety of sometimes rather tatty vessels, hence the more popular name. Nowadays there's a 7-day maximum anchorage allowance, more or less enforced, and the boats are, mostly, seaworthy. Big houseboats built on catamaran hulls are pretty popular in these sheltered waters and there are a few of them here, in between the yachts and motorboats.


To the south of us lies the town of Southport and the high-rise tourist resort of Surfers Paradise which, to our eyes, is pretty hideous. 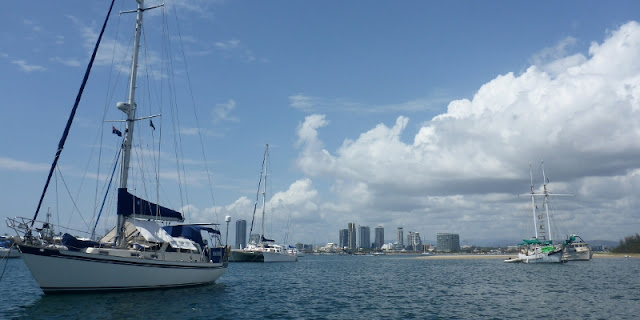 Since we last updated this blog, we've had a very sociable time, first meeting up with sailing acquaintances Brian and Audrie who live near here. We first met Brian when he was crewing on Liberty VI, belonging to his friend Greg, on the passage from Panama across the Pacific. Two years ago they were on a week's holiday in Fiji and spotted us in Denarau anchorage and gave us their address so it was lovely to see them again; they took us on a great day trip for lunch at Tambourine Mountain where we got to pet the hotel dog at the St Bernard Inn: 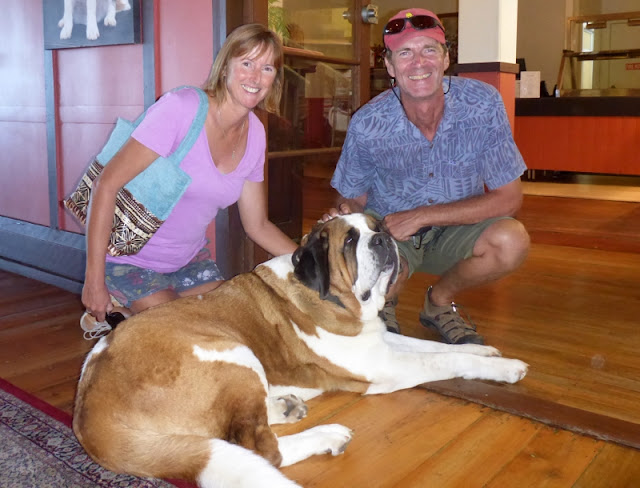 We then took a tram and bus down across the NSW border to visit Di's aunt Brenda and her great pal Claire and had a lovely time with them in Kingscliff; this time we didn't arrive a surprise (last time we caught Brenda's reaction on video - https://www.youtube.com/watch?v=DEMmRsZ8jYo&feature=youtu.be.)

Since then, the ‘small world’ nature of sailing was once again illustrated when we met the boats Ginelli and Calista (both last seen at Oyster Resort in Espiritu Santo) and Acrux, (whom we met only via the SSB radio last season), all anchored here. It’s a great sheltered anchorage though the incessant buzzing helicopters, obviously doing joy rides for the Asian tourists from a nearby resort, get pretty annoying in the daytime. We’re looking forward to heading somewhere a little less busy!


We’re hanging here a little longer than planned, however, (and whilst a perfect NE breeze blows), as we’re trying to get to the (ahem) bottom of G’s ongoing stomach cramps, originally diagnosed at giardia back in Feb. UK citizens get reciprocal Medicare rights here and the doctor has organised blood tests and, tomorrow, an ultrasound scan. G is pretty sure he isn’t pregnant, though. We’ve been really impressed with the level of care and support so hopefully this’ll all lead to a fix to an issue that leave G feeling distinctly below par at times. Apart from that, all’s good and we continue with boat jobs – the re-caulking of the teak deck is about 70% complete as we do a bit at a time whenever the sun isn't too hot.

You've probably gathered by now that the 'throw-away' society in which we live drives us nuts. We spend a lot of time maintaining and repairing things on the boat whilst mankind's relentless drive for cheaper and cheaper consumer goods is driving down quality so that items get thrown away and replaced when they break or stop working. It's refreshing, in contrast to this trend, to find companies making good quality stuff and standing by their products.

About 12 years ago, Dianne bought me a Leatherman multi-tool which has been probably the most useful bit of kit I have on the boat. Thanks to a good rope lanyard I've managed to avoid dropping it overboard and it's the first tool I go to for quick fixes on board. The product spawned lots of cheap, made-in-China copies soon after it was launched but the genuine, made-in-the-USA Leatherman remains the best quality (but most expensive) example of the genre.

Unfortunately, this year the spring-loaded safety lock (designed to prevent the sharp knife blade folding back onto your fingers) broke and I thought that I'd have to retire the tool before it injured me. I wasn't keen to stump up the $150 or so for a replacement so when we went into a camping shop that sells Leathermans, I was delighted to be told that that they have a 25 year warranty and they'd send it off for repair! Three weeks later a package arrived for us with a letter explaining that my Leatherman is no longer in production so they had sent me a brand new, latest model. Very happy! 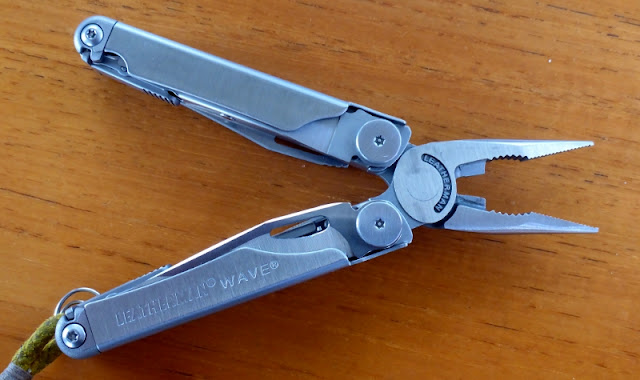