Safely into Porto Santo, Madeira, after a bit of an epic! 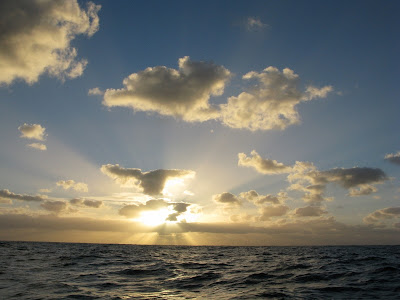 Sunrise (day 2 before the gale)

Sorry, this blog entry was delayed by essential engineering work, as you'll read below, so here's a bumper edition!

The final 24 hours of our voyage Porto Santo to was quite an adventure. Once the wind returned on Wednesday morning we had some really good sailing, close reaching in a Force 4 westerly and averaging a decent 6 knots. The updated Grib files from the satellite phone suggested that the wind would swing round to the northwest in the evening (allowing us to ease sails out and sail at our fastest point of sail, a beam reach) but would also increase in strength as the southern front of a big low pressure system swept down to meet us.  Although the boat was heeled over, we managed to cook a good hot lunch and a hearty hot supper. so were well set up for the final night sail and whatever the weather brought.

At about 23.00, the wind changed to the northwest with a bang and a huge wall of rain. We saw it coming so reefed down early but, even so, the conditions (force 6 -7 and big seas) were a challenge and we rolled away the yankee completely and reached with just the staysail and two reefs in the main. After a while things settled down a bit so we were able to leave the autopilot in charge until about 04.00 when more rain squalls brought yet more wind and waves. Graham was then on helming duty with a big grin on his face for the next 5 hours in full foulies, with occasional big waves giving him a good salt water soaking (at least the water was warm!) and and then the rain giving him a fresh water rinse. The good news was that the three flashes every 15 seconds of the lighthouse at the eastern edge of Porto Santo could be seen, giving an easier reference point than when just sailing to the compass. The sailing was exhilarating  again under staysail and two-reefed main, averaging 7.5 knots and bouncing up and over the swell. It was probably a good thing that it was dark so we couldn't see the size of the waves but Graham did see a  line of white water to starboard - the crest of a breaking wave - and was helpless to avoid it, so it filled the cockpit and gave him another salt water bath. The cockpit has large drains at the back so emptied quickly and Maunie just shook herself and charged on. What a boat, she feels so secure in conditions that would have challenged bigger yachts!!

At 07.30 we rounded the south east corner of Porto Santo and sailed into the shelter of the bay, just as another huge rain squall arrived to rinse away the rest of the salt on sails, deck and us. Stormvogel was about 3 miles behind so we radioed them to say we'd wait just in case their engine wouldn't start. Sure enough, they called back to say that the engine was dead so for the second time we uncoiled our huge coil of tow rope and towed them (very slowly against a 30 knot headwind) into the harbour to face the next challenge of how to get them safely moored. Repeated VHF calls to the marina and harbourmaster yielded no responses so Dianne resorted to a general all-ships call: "Any vessels in Porto Santo harbour able to respond, this is yacht  Maunie of Ardwall. We are towing a larger vessel with engine failure and need assistance to moor her." A German yacht, Bella (who we later found out had spent 2 weeks in the same Vigo boatyard as Stormvogel having engine work done so were friends of Heidi and Peter), responded that they had alerted the marina staff who would come out and take over the tow. Sure enough a dory came out to us as we entered the harbour and said they'd take over but then their engine promptly failed! Laugh? We nearly cried! So we continued with Plan B, which was to tow Stormvogel slowly to a mooring buoy which Heidi successfully picked up, releasing our tow line at the same time. Much relieved, we hauled in the rope and headed for the marina until Peter radioed - "Help, this buoy is drifting! I am really worried." We turned back but at last the marina team had got their boat sorted and moved Stormvogel into a safe berth. 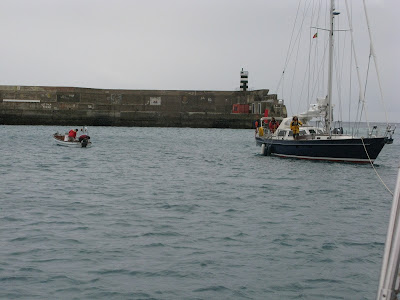 Towing Stormvogel into harbour, with the marina dory drifting with engine failure

We moored Maunie, went round to help take Stormvogel's lines, got big hugs from Peter and Heidi and a bottle of champagne was opened in very short order! Mathius and Ulrika on Bella invited us all round for a late breakfast aboard and it was wonderful to relax and share tall tales of the night's sail whilst outside the day alternated between bright sunshine and hard but warm rain and wind squalls.

During the afternoon we sorted all the paperwork with Customs and the marina, walked the 2 miles into town to find a very good supermarket that was absolutely crowded (we later realised that the ferry had arrived that morning with fresh supplies of fruit and veg) so we did a big shop and got a taxi back to the boat. We walked back into town for a meal with the Stormvogel and Bella crews and can clearly confirm that the Brisish held stereotype of Germans not having a sense of humour is entirely wrong. We laughed a lot and until the events of the past 4 days caught up and Graham suddenly began to fall asleep at the table.
So, into Friday morning and we both slept a solid 12 hours. The update from Stormvogel on the engine front wasn't good. Peter had checked the engine oil and found it to be white and thick - a sign of water in the sump. So we believe that the Vigo installation of the new motor, which included a new exhaust system, has a major flaw. Somehow In the big waves, sea water has been forced back up the exhaust pipe into the cylinders and past the piston rings into the sump. This is Not A Good Thing and will have potentially done damage to the brand new engine and explains why the starter motor couldn't turn the engine over. Graham spent most of the day working with Peter and Mathius trying to save the engine from very early death. Watching sea water shoot out of the pistons when we removed the glowplugs and turned the engine over by hand was shocking - the engine had become a 4-cylinder water pump. The immediate action was to change the engine oil and flush the sump as well as possible (using diesel rather than oil as a technique to flush it) and to drain the exhaust system of water to prevent it filling the cylinders again. In the process we believe that we found the very basic error that cause the engine to syphon sea water into itself and as darkness fell we managed to restart it.

So the thing is running again a but we assume that it will have done some damage to itself, particularly during the 40 hours of motoing after the problem first appeared since the lubricating oil must have contained sea water by then. Peter will have a battle with the Vigo yard take responsibility for their error (and maybe even replace the engine if it has done internal damage) but we hope he can now sail for Gran Canaria where there are good engineering facilities. What a nightmare, but we celebrated our success with a bbq and beer. 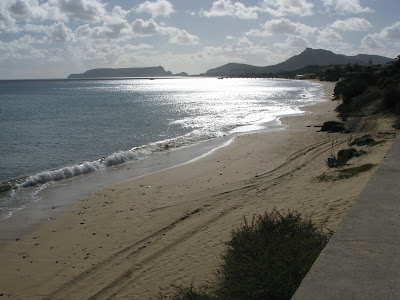 The beach at Porto Santo

The forecast looks as though we'll be here a couple of days at least but we are in good company of lots of other ARC boats so we don't think we'll be bored! Wifi connections require a 3/4 mile walk with the laptop to an 'internet lean-to' outside the marina office but we will update you when we have more news of our next plans.