The Answer to Life, The Universe and Everything

If you know The Hitch Hiker's Guide to the Galaxy by Douglas Adams, you'll know the story of a race of intelligent beings on a distant planet who built a super-computer called Deep Thought to come up with the answer to Life, The Universe and Everything. On the day of the Great On-Turning, Deep Thought confirmed that there was indeed an answer but he'd have to think about it - for about 300 years. 300 years later he confirmed he had found the answer and with great majesty pronounced it to be: Forty Two.

So, it's an important number, and with a prefix even more so we think. Maunie's ARC Rally number is 242 and Stromvogel's is 142. Peter and we have decided this is a Sign and Peter has already made the Hitch Hiker's Guide connection on his blog - Graham and Peter think very alike!

So back in Las Palmas, preparations continue. Graham has been up the mast to try to resolve our wind speed and direction indicator which has decided to go on strike - it appears that the torrential rain has done for the electrical connector at the top of the mast! It have him the chance to take a few photos whilst he was up there: 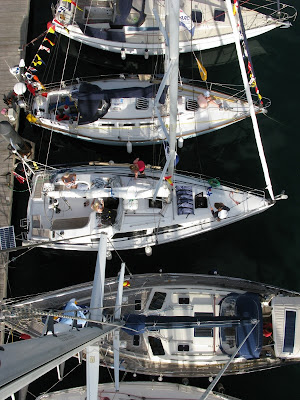 Looking down on the two smallest boats in the ARC (both 32ft). Troskala (top) is a Rival 32 sailed by Oliver and Carlotta who we met in Porto Santo; their blog is here 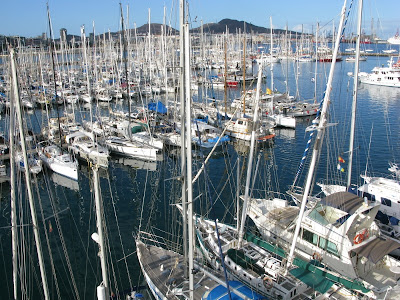 Meanwhile we have discovered a problem with one of our mast cars (sliders that keep the front of the mainsail attached to the mast); it has worn and lost its ball bearings. We spent a frustrating hour trying to remove it (finally having to drill out a couple of seized screws) but the local sailmaker is confident that he can get a replacement. 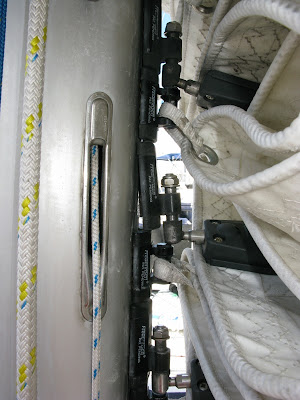 So with all this boat work, so far we haven't really walked out of the marina! Today the programme of seminars starts, so Graham will go to one on 'Routing and Weather' given by weather guru Chis Tibbs whilst Dianne is going to 'Provisioning' and 'Fitness at Sea'. The latter will be important as it's very easy to over-indulge here; there's a 'Sundowner' event each evening with free drinks and nibbles and last night we were invited to a brilliant curry meal aboard Roysterer who we also met in La Gomera. Di obviously wants to look her best at such social events so it very pleased with her new travel iron! 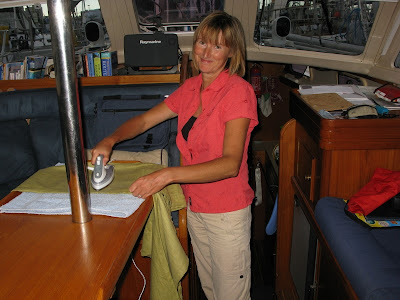