It's a small world!

We've had a busy few days here. Boat preparations continue and our crew will owe us a large drink for all the food shopping we've done! We have completed all the long-life provisioning so will just get a delivery of fresh meat and fruit and veg on Saturday (the day before the start).

We employed the World's Fattest Diver (a wonderful chap of at least 20 stone) to come and give the underside of the hull a good polish. It's a bit psychological but it's good to know that there's nothing growing on the keel that might slow us down and it's probably worth a tenth of a knot of boat speed which, over our expected 3 weeks crossing, would equate to about 50 miles of better progress, or 6 hours or so. Watching him struggle out of the water on to the pontoon was quite a spectacle but he had a brilliant sense of humour; when he finally flopped onto the walkway he turned to us with a grin and said, "Like a seal, huh?"

Yesterday was the Grand Parade and official opening of the ARC 2012. We ambled round the marina behind national flags and were very amused to see that Peter from Stormvogel was the official flag-bearer for Germany: 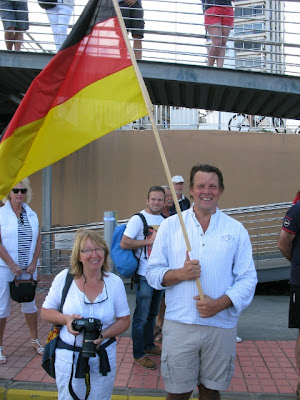 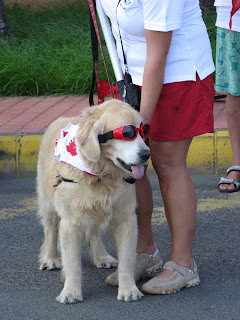 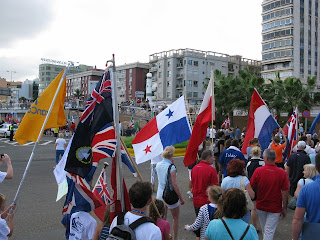 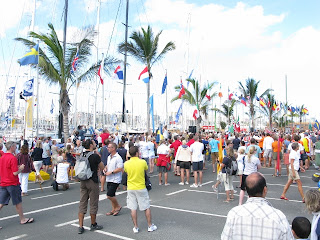 When we got to the end of the parade we were introduced to a chap called Andy from England who had seen our boat name on the entry list. He had been the delivery skipper who brought Maunie across from Ireland to be put on sale in Lymington so was the last person to sail her before we bought her! She was in pretty poor condition then so he's really keen to come and see her again. He's now a professional skipper and invited us aboard his boat for a coffee. His yacht is a brand new Oyster 82 called Raven - truly a super-yacht (and about 4.5 million quid if you fancied one!) - the owner arrives on Wednesday and there will be 9 aboard for the crossing, including a chef.

On a much smaller scale we got chatting to another skipper who has a boat the same length as us, 38ft. We are definitely at the small end of the scale as the average size of boat is 50ft so it was good to compare notes on our plans. Nigel's boat is a Sigma 38 so we said "Oh, we chartered one to do the Round the Island Race a few years ago, She was called Paraselsus.", to which he replied "Well, I bought that boat just after that, did her up and sold her last month".

The final small-world connection is that the skipper we had on that race was a really good, ex-Challenge guy called John Farndell. John is skippering a Challenge 72 in the ARC this year, though hasn't arrived yet.

Enough of the coincidences - we're back to work today. Fergus and Rich arrive later and meanwhile the Raymarine engineers are coming to fix our faulty wind vane and they will also update the software in our chart plotter.
Posted by Graham and Dianne at 08:53