The word of the day is 'dreich'

We’ve had a couple of nights in the little marina of Tarbert, Harris. Yes, another Tarbert, there’s lots of them up here, as mentioned in a previous blog story. It’s a lovely little place, in some amazingly beautiful countryside, but unfortunately the weather has been ‘dreich’, as they say in Scotland. Wet and dull and quite windy too.

Still, the weather allowed us to do a few chores, so the washing is done and a few more boat jobs have been ticked off the list.

The marina – just a single pontoon, run with great enthusiasm by a chap called Fred – is just opposite the ferry terminal which is undergoing an £18M upgrade for a new ferry. However, the shipyard given the contract to build the ferry, Ferguson Marine in Glasgow, went bust and had to be rescued by the Scottish Government in 2019. The new ferry now won’t enter service until 2023 at the earliest and costs have spiralled.

The arrival of the existing ferry is quite entertaining as it comes alarmingly close to our berth! 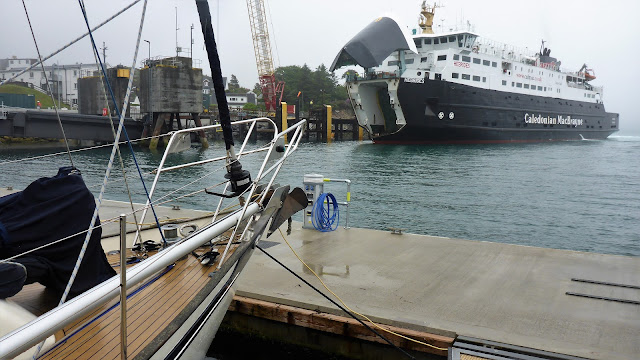 We did manage a brief, 20-minute, spell of clear weather yesterday afternoon before the rain moved in again so managed to get these photos. 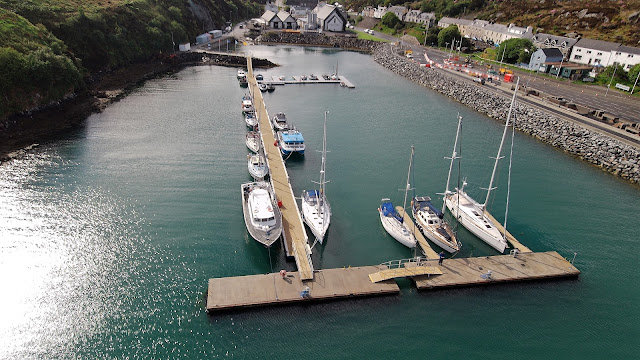 Today promises to be brighter but still breezy, so we plan to move all of 5 miles to the little island harbour of Scalpay. There’s not much there as the community-run shop has closed and the famous Scalpay Bistro has yet to re-open (all the hospitality venues here are struggling to find staff); however, if the rain holds off there’s said to be some good hikes to be had on the island. After that, tomorrow looks promising for the crossing of the Little Minch, the stretch of water between here and Skye. With an eye on the calendar, we need to head back to the mainland and start heading south.
Posted by Graham and Dianne at 09:05