Sailing into the azure blue waters of the Clyde?!

We're pleased to say that the rounding of the Mull of Kintyre was a lot less stressful than was the Mull of Galloway, a few weeks ago. We managed to get our timings pretty much spot-on so had increasingly fast current pushing southwards and then scooting us round the tip. At one point we had over four knots of tidal assistance so our SOG (speed over ground) briefly showed over 12 knots when we were sailing at about 7.5 knots through the water. 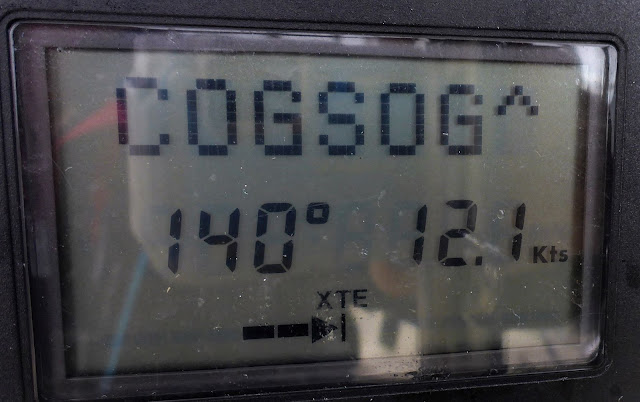 We had a lovely sail up to the port of Campbeltown and found a spot on the visitors' pontoon; luckily we arrived in the early afternoon because boats were being turned away when it filled by mid-evening.

The town itself came as a bit of a shock - fast moving cars, police and a lot more shops than we've become accustomed to. Graham even had a haircut before we left at noon on Saturday.
The sunshine also revealed something slightly odd - the sea had turned an almost turquoise colour.
The answer, apparently, was some kind of rare algae bloom that was reflecting sunlight much as coral sand does in warmer places. 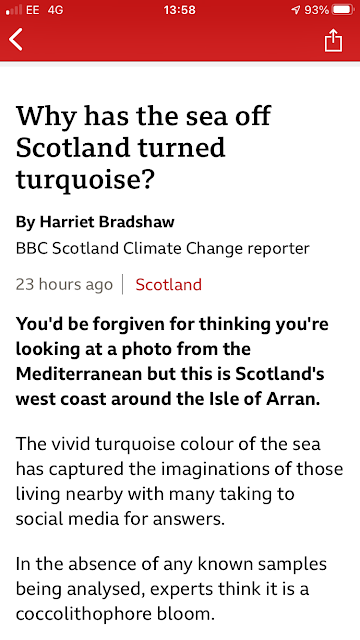 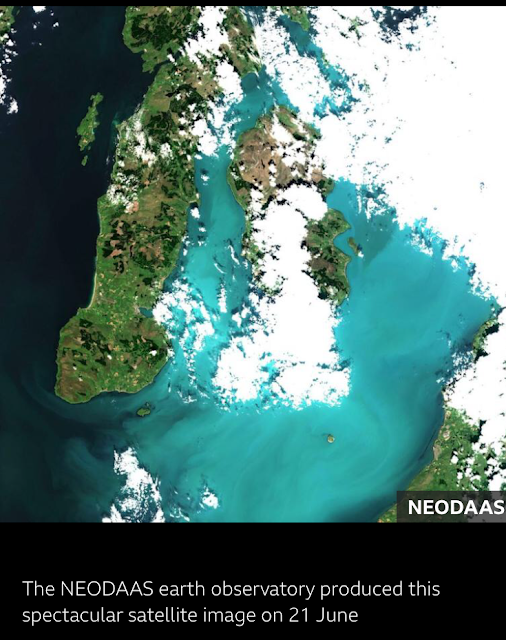 The weather seems to be settling in for a nice period of light winds and sunshine and so we motored around the southern tip of Arran yesterday to anchor off Brodick Castle on the eastern side of the island. We enjoyed an absolutely calm night.

We're now in Ardrossan and it's all-change for a few days. Di's getting the train down to Lancashire to spend a few days with family and to see her dad, while Graham's dad, Geoff, is joining him for a boys' tour of the Clyde. It promises to be a much calmer experience than the last time he was aboard!
Posted by Graham and Dianne at 16:36