Losing on the horses, avoiding the Navy and getting some wheels

We are now in Manly harbour, just south of Brisbane, berthed at the very smart Royal Queensland Yacht Squadron. The boat harbour here is absolutely vast and home to four marinas and thousands of yachts; our membership of the Royal Ocean Racing Club gives us reciprocal rights to come to RQ, as it's known in these parts, and we had a good day yesterday watching the dinghy and keelboat racing in 'challenging' conditions.

But to backtrack a little, on Tuesday we experienced an iconic moment in the Australian sporting calendar, the Melbourne Cup. The is 'the race that stops the nation' and is the world's most lucrative horse race - the winning horse gets $3.5M (well, presumably it gives it to its owner) so the event attracts entries from all around the globe. It's an opportunity for a lot of Australians to dress up, go to parties and drink too much, so we were delighted to join Andy and Sue and friends at a great bar in Hastings St, Noosa, to enjoy the fun.

We left Mooloolaba to head further south into Moreton Bay - another wide but shallow area of water which has many different channels between the sandbanks but only one major route for the big ships heading for the incredibly busy Port of Brisbane. Our course to Manly required us to cross the narrow shipping channel into the port so it's mandatory to monitor Channel 12 on the VHF to listen to VTS (the maritime equivalent of air traffic control), responsible for organising the ships leaving and entering the port. We could hear that one ship, the 570ft Highland Chief' would be leaving just as we would be crossing the channel (under sail) so we radio'd VTS to confirm that we had the ship on our AIS screen and would keep clear; the 'steam gives way to sail' rule doesn't apply when ships are constrained by narrow channels.The VTS officer called back to acknowledge us and warned us that there was a Navy warship, HMAS Darwin, coming inbound as well. Oh, good.

Thankfully we cleared this busy area safely and had a very good sail into Manly.

Once here, we managed a very satisfactory transaction to add some wheels to Maunie's inventory. Lots of the marinas we will visit in Australia are some way out of town so we decided that it'd be good to find a folding bicycle to make shopping trips easier; over the past few days we'd been looking on eBay and Gumtree to see what might be available. Anyway we found an advert for an aluminium-framed Hasa bike, which got some very good reviews, and yesterday morning became proud owners of it. It belonged to a couple who had it on their motorboat but used it only twice in two years so it's as-new and was a bit of a bargain; best of all, it fits neatly into our cockpit locker... 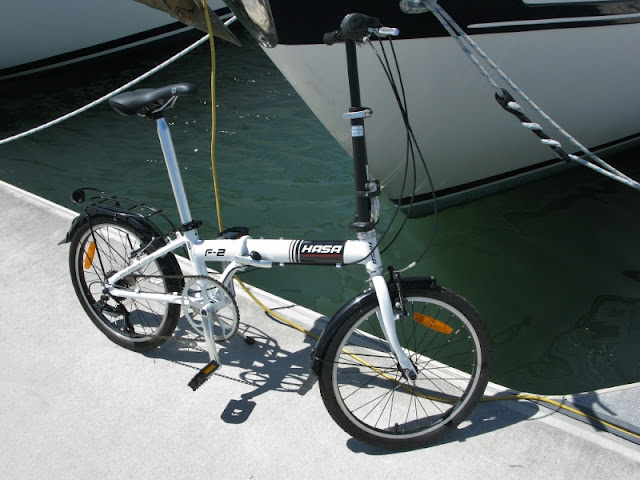 Meanwhile, the busy social and touring life continues - we met up with Steve and Michelle from the catamaran Citrus Tart (first met in Tonga, then Fulaga then Waiheke) for a great Indian meal last night and tomorrow we are heading into Brisbane to visit the Loan Pine Koala Sanctuary (a strong recommendation by niece Laura) and to see a few city sights.

It's pretty hot here now (the forecast for the city today is 34 degrees!) so we're getting up early and Maunie has all her sunshades in place to make life bearable aboard. On Tuesday we're heading a little further south to the Gold Coast to have Maunie lifted out of the water for a few days for some routine maintenance and then we'll carry on towards Sydney. But first, of course we'll be calling in on Auntie Brenda (who knows we're coming this time!).