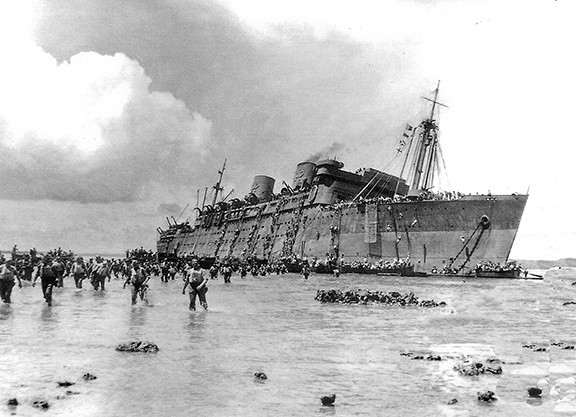 In 1942 the USS Coolidge steamed into the harbour at Luganville. A 650ft ocean liner, requisitioned in WW2 and converted into an armed troopship, she struck two ‘friendly’ mines due to a communications mix up and the captain beached her on the reef. Over 5,300 men walked to safety ashore.

A large military base and harbor had been established on Espiritu Santo and the harbor was heavily protected by mines. Information about safe entry into the harbor had been accidentally omitted from the Coolidge's sailing orders, and on her approach to Santo on 26 October, Coolidge, fearing Japanese submarines and unaware of the mine fields, tried to enter the harbor through the largest and most obvious channel. A mine struck the ship in the engine room, and moments later a second mine hit her near her stern.
Captain Henry Nelson, knowing that he was going to lose the ship, ran her aground and ordered troops to abandon ship. Not believing the ship would sink, troops were told to leave all of their belongings behind under the impression that they would conduct salvage operations over the next few days.
Over the next 90 minutes, 5,340 men from the ship got safely ashore. There was no panic as they disembarked; many even walked ashore. However, the captain's attempts to beach the ship were thwarted by a coral reef. Coolidge listed heavily on her side, sank, and slid down the slope into the channel.
Now she’s one of the most accessible and biggest wreck dives in the world and is an amazing experience. The holds are still full of vehicles and tanks and guns and there are safe access points to various parts of the hull. For obvious safety reasons we have to dive with certified dive guides but Graham did two dives on the wreck yesterday and says the second, when he entered the wreck, was his best dive ever!


The dive is a deep one, and Graham's deepest at 43m, so photography, particularly inside the wreck is particularly difficult unless you have fancy strobe flashlights. Paul from Iolea took his GoPro and his shots do give you an idea of what it was like: