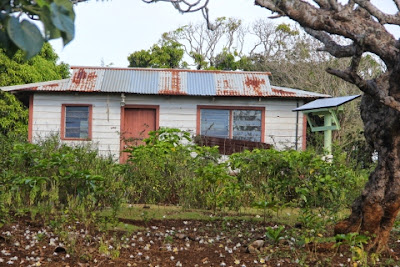 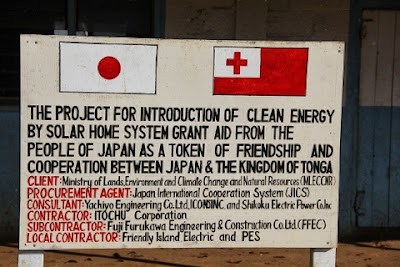 Above: Island Village house with new solar power
We are now back in the main anchorage at Neiafu for the Vava’u Regatta which started last night with a fancy-dress pub crawl. It was a fun event! Photos to follow. The first race took place this evening, a short round-the-cans race in the habour with only about 13 boats taking part - the rest, sensibly, put off by the almost complete absence of wind. We ghosted around the course, chatting to the other boats but eventually had to abandon when the wind disappeared altogether. Quite a contrast from the middle of last night when a front came though bringing a huge rain squall and over 35 knots of wind!
The harbour is full of boats now so the internet is completely overloaded so we’ve just a posted a couple of photos from the villages. There has been a big push from Japan to bring solar power to individual houses in the islands which has just been completed. Being slightly cynical, one feels that the rush of offers for aid from China (significantly) and now Japan is linked to bigger political aims such as fishing rights (Chinese fleets are suddenly hoovering fish up here) and pro-whaling votes.
Will hope to add more photos when the internet is less busy (middle of the night, probably!)
Posted by Graham and Dianne at 10:19