Avoiding The Clach, The Leug and The Spoig - but looking for wind

More crew changes on Maunie - Dianne returned safely from her Lancashire trip, Geoff returned home and Ana and Colin (ex-Ithaca) joined us for a night and a very pleasant daysail. Finally, Fergus (Atlantic Crossing crew member) has just joined us for the passage south back to Devon. All in all, it's been lovely to catch up with everyone.

The Clach, The Leug and the Spoig (in case you're wondering) are three splendidly-named but potentially dangerous rocks in in Millport Bay, Great Cumbrae, where we picked up a visitors' buoy for a night. 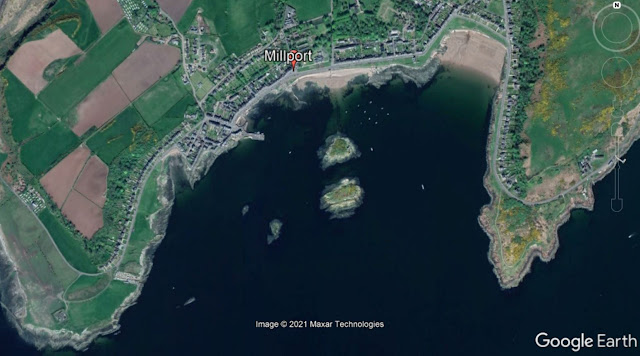 Great Cumbrae is only a short ferry crossing from Largs and the houses on the seafront testify to the fact that it's been a holiday destination for well to-do Glaswegians for a century or more.
By contrast, the neighbouring Little Cumbrae is a privately-owned island with a ruined castle and a rather splendid (but unkempt) house. It was for some time a yoga retreat but looks as though it needs a bit of investment now.

Firth of Clyde sightseeing completed, we returned to Ardrossan Harbour to re-fuel, re-water and to stock up on food ready for the passage south. Unfortunately the weather gods aren't really playing ball so we have the option of a lot of motoring in little or no wind or else to wait for at least a week in the hope of a more favourable forecast. Time isn't on our side and so we've taken the decision to head for the Isles of Scilly in one passage (about a 55-hour trip) with the hope of a sailing breeze at least for the last day.
All being well, we'll get to St Mary's, Isles of Scilly, on Thursday afternoon. In the meantime having Fergus aboard makes the night watches very civilised 3hours on, 6 hours off so we should have some time to catch up on some reading!