The sailing season starts, at last!

For obvious reasons, this has been a very strange start to the year. From a sailing perspective, we’d normally be taking the opportunity, suitably wrapped-up against the elements, to sail throughout the winter but Covid regulations meant that we had to leave Maunie alone on her winter pontoon mooring until the end of April.

Our normal routine of little-and-often boat maintenance has therefore been compressed into some high-activity bursts and, unfortunately, we had some damage during one of the winter gales. The boat obviously surged against her mooring lines and a chunky fairlead and a length of the teak capping rail underneath it were ripped off in a particularly violent storm. 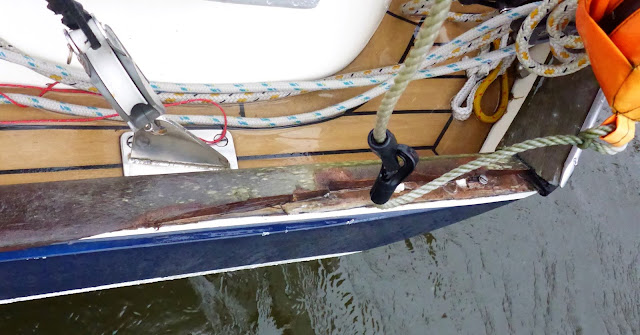 Thankfully, the fibreglass hull wasn’t damaged and a local boat-builder charged us the princely sum of £35 for a section of teak which he machined to the correct profile; Graham had a fun day fitting it, with better quality bolts tapped into the hull for increased strength.

While Di drove up to see her family in Lancashire, Graham then spent 4 days aboard and fitted the last of the new deck hatches to complete the replacement of the four, 24-year-old originals whose frames were corroded, their Perspex lenses crazed and the seals beginning to leak. The process of removing the old hatch wasn’t easy as the sealant wasn’t for giving up its grip without a fight!

The other key job was to clean Maunie’s bottom which was pretty slimy after months of disuse – there’s a 2-minute video of that job, thankfully completed in bright sunshine, just click HERE.

So, here’s the latest plan: As of last Thursday, we have moved on board Maunie for 3 months and friends in the village, who have sold their house but are waiting for the completion of their new-build, are borrowing our place. It’s a great result for all concerned and they will look after the garden and Bertie the cat in our absence. This gives us a clear window to sail west and then head up to Scotland – we’re hoping to get to the Outer Hebrides and this plan has been made easier by us both getting our two Covid vaccine jabs done, thanks to our very helpful GP surgery pulling a few strings to get earlier second appointments. Of course, this all assumes that the weather plays ball but the calm, dry and sunny conditions of April have naturally been replaced by a series of low-pressure systems, high winds and rain. It’s also really cold!

Monday’s forecast turned out to be accurate and Maunie heeled over in the wild gusts (we saw one gust of 45 knots on the anemometer) but we managed some sleep and things have calmed down a bit since. A boisterous day-sail on Wednesday reminded us of how rusty our sailing skills are but was a good test of the boat systems and it highlighted a rather worrying electronics problem. It started with regular interference in the VHF radio – annoyingly load bursts of static – and then suddenly the main GPS system wouldn’t find any satellites. We have a couple of back-up stand-alone GPS systems but this was a real concern as the main receiver sent data to our cockpit instruments and the chart plotter, so the failure was pretty fundamental. When Graham had a look at the GPS receiver, the connector was very corroded and one of the pins broke off completely when he took it apart.

We chatted to the wonderfully helpful electronics expert, Chris, at the local marina and he said that our Raystar 125 receiver is, of course, now obsolete, and that the replacement Raystar 150 model would cost the best part of £300 and would require a bit of work to make it fit the positively ancient, 24-year-old  instrument network on Maunie. Oh, and the bolt holes to secure it are in a different place. Worse still, he didn’t have one in stock and the current world-wide shortage of microchips meant that the manufacturer couldn’t supply one. “Oh great!”, (or words to that effect) we said, but then Chris asked which chart plotter we have. It’s a 10-year-old Raymarine unit that we fitted before our big adventure and it has a built-in GPS that was switched off in our set-up. “If you enable it, it might feed data to the instrument network. I’m not sure, but it’s worth a try”, said Chris so we hurried back to Maunie, found the relevant setting in the chart plotter menu to enable the internal sensor and fired it up.

To our relief, the cockpit instruments all picked up the GPS data and, even better, the interference in the VHF was gone! Fixes like this very rarely happen in boats so we are delighted to have found this work-around; we sent a text of thanks to Chris for his help and he phoned back a few minutes later to say he had, after all, found a Raystar 150 in their stores and did we want to buy it? Had he found it when we first talked to him, we’d be £300 and a lot of installation time poorer right now, but since the internal GPS solution seems to be working perfectly, we decided to decline the offer!

Anyway, we are now waiting for a weather window to head west, in between a succession of low-pressure systems rolling in off the Atlantic. As we write there’s another gale passing through (another disturbed night’s sleep with a 4.00am dance around the foredeck in the driving rain to secure the dinghy!) but tomorrow (Sunday) looks OK from a wind perspective although we’re slightly concerned about the leftover swell (we might just do a mini adventure up the Dart instead and wait for better sea conditions on Wednesday).

We’ll be sailing in company with Adam and Cindi on their new, awesome Boreal 52, Bravo. Unfortunately, they’ve had a few technical issues of their own to contend with, but we hope that all will be well for the trip. We’ll post regular updates as we go. Can’t tell you how excited we are to be sailing again!