We are regularly reminded of how little we British know of the events in the Pacific during the second world war. Sure, Pearl Harbour and some of the major Pacific Island battles are common knowledge but we had no idea that Sydney and Newcastle were shelled or that Japanese submarines actually got into Sydney Harbour and sank one ship. Our education on these events came about by accident, so we thought we'd share some of it.....

We anchored a few days ago on the north side of Dangar Island in the Hawkesbury River. Today the island is home to about 200 people who commute to the shore by ferry or in their 'tinnies' (aluminium open boats) and we went ashore to the General Store / Cafe / Social Hub for a coffee.

Whilst we drank our coffees we picked up a copy of a booklet produced by the local historical society and discovered that this sleepy island was once a centre of industry. The beach in front of the General Store was where the huge riveted-steel spans for the nearby railway bridge were constructed by an American company back in 1878.


The steel spans were built on floating rafts and towed into position, at high tide, between the stone pillars (which, incidentally, required foundations over 50m deep to find bedrock) and, as the tide dropped, they settled into place. Quite a feat of engineering in 1878! The original bridge began to suffer structural problems in the 1930s so the new bridge was built along side it and opened in 1946.

WW II saw another dramatic change to life on tranquil Dangar Island. A substantial military presence, including anti-submarine nets and anti-aircraft gun emplacements, arrived as the military realised that the vital rail bridge might become a target for Japanese attack. This belief was confirmed when charts recovered from a midget submarine, sunk in Sydney Harbour in 1942, showed it marked in red ink; this discovery sparked a new programme of construction of coastal defences. We'll come back to the submarines a little later.

From the Hawkesbury we headed back out into Broken Bay and decided that Brisbane Water looked like an interesting place to explore; it's a huge expanse of inland water, accessed via a very narrow river entrance, with the city of Gosford at its northern end. 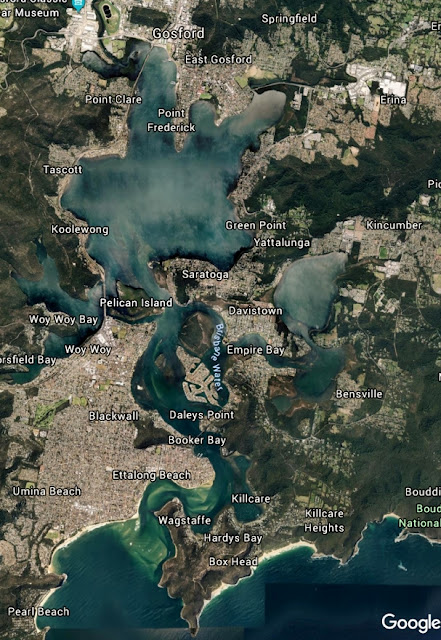 We'd read the Pilot Book details which emphasised that some of the river channel is shallow and subject to silting so we arrived just half an hour before high tide and motored gently in. The alarm bells rang when the depth at the river bar was only 2.1m, rather than the 2.9m indicated on the chart (which meant we had only 30cm beneath our keel) but worse was to come as we turned around Wagstaffe Point and we watched the depth-sounder show 2.4, 2.1, 1.9, 1.8 ..... "Full Astern!!!" The yachty equivalent of a handbrake turn and we were out of there; we had no desire to hit the bottom just as the tide was starting to ebb! We later phoned the Marine Rescue base at Gosford and they confirmed that the channel had silted and that our draft of 1.8m was definitely 'marginal'. With a local guide we'd have probably got in but this river is definitely a place where you'd want a boat with a lifting keel.

So, we headed back out towards Pittwater and noticed, on West Head, evidence of wartime coastal defences. 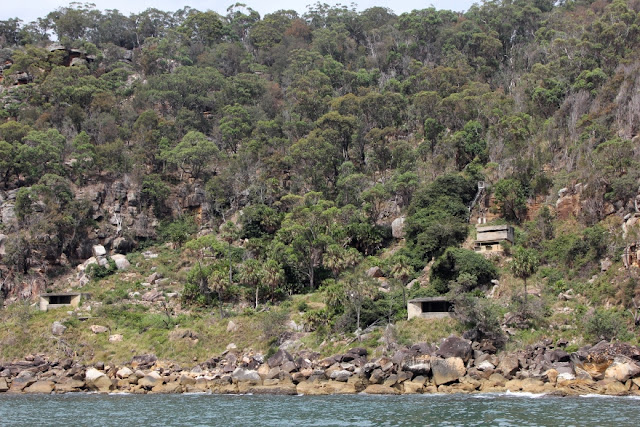 Above the observation post there seemed to be a new staircase giving access to the site so we decided to anchor in Americas Bay and, the following morning do the 8km hike over to West Head to investigate.

The wartime access to this rocky cliff site was pretty ingenious - a 50 degree cliff railway, with a 3-tonne counterbalance, would allow men, materials and ammunition to be lowered to another horizontal railway which connected the gun emplacements and a subterranean ammunition store:

This hugely expensive military emplacement never fired a shot in anger but the threat was very real. So, back to those submarines in Sydney Harbour; here's a summary from Wikipedia:


In late May and early June 1942, during World War II, submarines belonging to the Imperial Japanese Navy made a series of attacks on the cities of Sydney and Newcastle in New South Wales, Australia. On the night of 31 May – 1 June, three Ko-hyoteki-class midget submarines, each with a two-member crew, entered Sydney Harbour, avoided the partially constructed Sydney Harbour anti-submarine boom net, and attempted to sink Allied warships.

Two of the midget submarines were detected and attacked before they could successfully engage any Allied vessels, and the crews scuttled their boats and killed themselves. These submarines were later recovered by the Allies. The third submarine attempted to torpedo the heavy cruiser USS Chicago, but instead sank the converted ferry HMAS Kuttabul, killing 21 sailors. This midget submarine's fate was unknown until 2006, when amateur scuba divers discovered the wreck off Sydney's northern beaches.

The second sub was damaged by depth charges and was hauled to the surface the following day. Its propellers were still turning but the crew were found dead, from self-inflicted gunshot wounds.

Only one sub managed to fire its torpedoes but it missed its target, the USS Chicago. One ran aground but the other hit the seawall in Garden Cove, the explosion sinking a requisitioned ferry, killing 21 men.

The events of that night were a typical wartime story of good and bad luck, questionable leadership and judgement, poor communications and general confusion. If you're interested in this sort of thing, the full story is a fascinating read - here's the link

The outcome of the attack could clearly have been far worse. As it was the mother-ship submarines waited in vain for their midget subs to return and departed after firing 9 shells into Sydney. Only one shell exploded, amazingly, but the effect on the Australian government and people was significant.