Photos from Eden - and a recipe to tempt you

Here are some photos from the past few days; though the wind has been pretty variable (gales today) we've had plenty of blue sky and sunshine to enjoy this place.

On the southern point at the entrance to the bay is a curious and imposing tower, built in the 1840's. One Benjamin Boyd came here to make his fortune (he lost it, actually) through farming and whaling and he couldn't resist the temptation to build a town (which he modestly named Boydtown) and a tower that he thought would make a splendid lighthouse:

Unfortunately the government didn't want it, possibly because the self-promoting Boyd insisted on his name being carved on it at the top!

So the tower was used to spot passing whales for the whale hunters to chase but, by the mid 1840's, whale numbers were already in steep decline, possibly because of some unusual help in previous decades. The Whaling Museum in Eden was built in 1934 to house the skeleton of Tom the Killer Whale. He and his black & white friends formed an unlikely partnership with the whalers by driving the sperm whales towards the shore then alerting the men at the whaling stations by slapping their tails on the surface. Tom even used to grab ropes hung from the bows of the oar-driven boats, so the story goes, and tow them out to the kill.

Once a hunted whale was finally dispatched it would be towed into the bay and anchored for a few hours to let the orcas eat the huge tongue as their reward, leaving the blubber and bones for the whalers to process into valuable oil. Once Tom died, the other orcas didn't come back and the whaling industry declined pretty quickly. Boyd's great enterprise went bust, leaving Boydtown half-completed, and he left to try his luck, again unsuccessfully, in the goldfields of California.

Today East Boyd Bay has some apparently successful industry in the form of a logging mill and whose by-product, wood-chip, is loaded into huge bulk carriers for export to China. 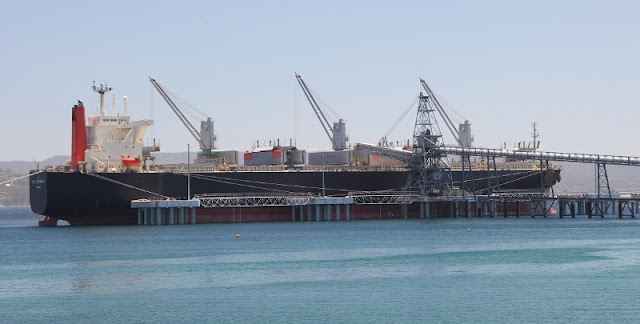 The other jetty in this corner of the bay belongs to the Navy and is used to load ammunition onto ships. HMAS Anzac, a frigate, arrive here this morning.

And finally, something (possibly) useful on this blog, for once. We discovered this easy recipe and tried it today with success. Take a muffin tray, oil the cups and line them with thin-sliced smoked ham. Add some finely grated cheddar and then crack an egg into each, with some salt and pepper. Bake at 190 degrees C for about 25-30 minutes until the egg is just set and then serve with salad. Easy but tasty. 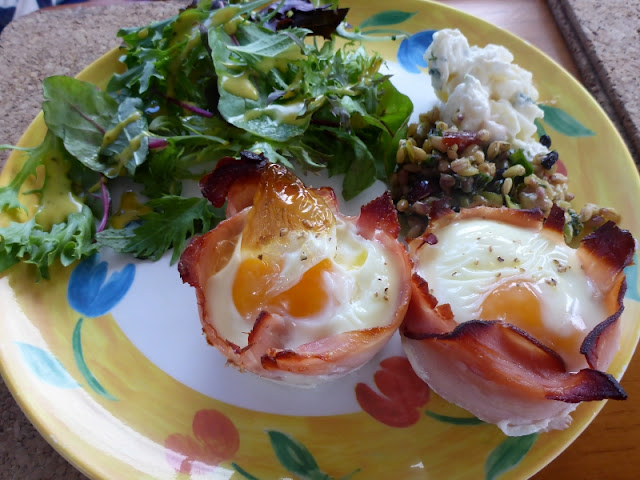