After a few days at anchor we've gone all posh and moved into the Marina Taina with some very large neighbours opposite; more on them later. Actually we've been pleasantly surprised at the cost of a berth here (about two-thirds that of a typical British marina) and we have the benefit of our own tropical fish aquarium just off our stern.  The side of the concrete dock is being colonised by coral and is teaming with little brightly-coloured fish.

Maunie to the left, superyachts to the right

The reason for moving from our free anchorage is that we have made contact with Christian the Fridge Man who tells us he'll be here at 8.30 in the morning to look at our poorly aft fridge. This isn't the one that Patrice the Fridge Man (no relation) upgraded to water cooling back in Martinique; that's still doing fine. So we hope we'll get the aft fridge fixed and the watermaker will also be handed over to Gilles the Watermaker Man tomorrow for a service.
Whilst we are here we are within easy walking distance of Carrefour and, of course, have the usual marina luxuries of electricity, water and a good set of loos and showers ashore.

Our dock is also the temporary home to about ten superyachts, both sail and power, and there are more up in the town quay (see Stormvogel's blog for his photos). 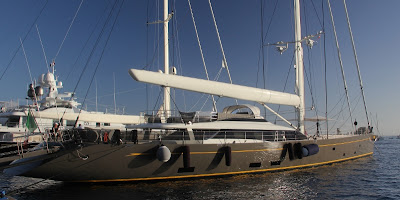 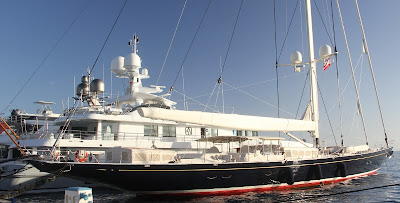 We can confidently predict that the charges the boats opposite us are facing wouldn't be described as 'pleasantly surprising' but, then, normal values don't apply to these awful things. Don't get me wrong, some of them (the sailing ones at least) are stunningly beautiful boats, but they are such in-your-face demonstrations of "I've got so much money I don't care" (particularly as less than a mile from here there's a shanty town where families are sleeping in shacks) that it makes you want to shout rude words at them.

This would be pointless of course, as the targets of our ire - the billionaire owners - aren't here.  Instead the large and well-paid crews go through the daily routines of polishing the bits that they polished the day before, checking the systems and recoiling the beautifully coiled ropes before they knock off at five and head to the bar. They look bored out of their minds (and stop for very frequent fag breaks) and much just ache to take a boat like Erica XII (yep, the owner want us to know he's already had eleven of theses toys) out for a blast under full sail. 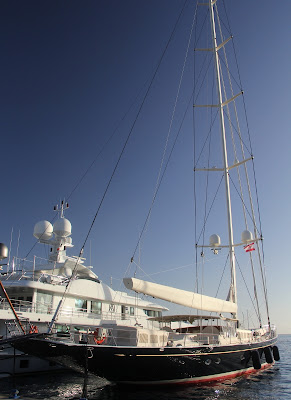 There's clearly a sort of arms race going on with owners wanting something bigger than the opposition but we've also noticed that there's some kind of one-upmanship going on with the number of satellite domes that each boat carries. Now on Maunie we are very delighted with our little satellite dome which unfailingly locks on to the nearest Inmarsat satellite and allows us to send emails and voice calls from the middle of nowhere (and, most importantly, receive vital weather forecasts and safety bulletins), even when the boat is pitching and rolling like a demented thing. 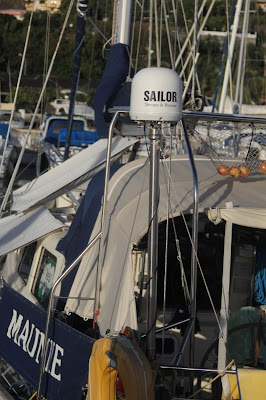 It also will provide (slow) broadband internet but at a price - we're on the 'economy' tariff (about £65 per month) which allows us no more than 5 Mb of data transfer each month and we work very hard to stay within this limit; this is why our email automatically strips out any incoming attachments such as photos and we access these when we have shore-based wifi. So one dome does all this and why, you might wonder, would you need any more?

Okay, of you're a Russian billionaire you might need to be able to stay in touch with your dubious empire for the one or two weeks a year you actually spend on the superyacht so perhaps a second dome as a back-up might seem a worthwhile investment. And if you must access satellite TV in places more beautiful than any TV shot can convey, maybe you need one of the bigger TV domes as well. But honestly, some of these shiny toys have more domes and antennas than NASA: 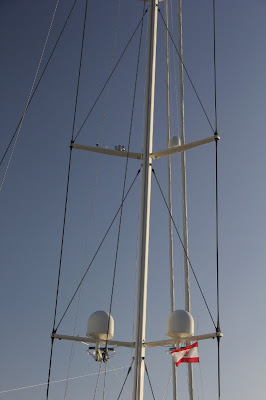 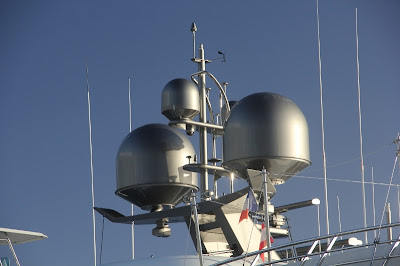 4 domes, 2 radars and all sorts of little pointy bits

We think that some are just empty dummies rather than working units. We have certainly heard of some superyachts having beautifully painted and polished but engineless old helicopters strapped to their decks for show so it's entirely possible that the displays of arrogance and wealth opposite us have a few extra bits of IT bling fixed to their masts just to make things look a bit more symmetrical. Then again, with the budgets these boats have, why not just spend the extra £100k and have a real one, just in case? Bah! We need to get back into the islands and villages as soon as possible; in the meantime must get one of these signs for Maunie: 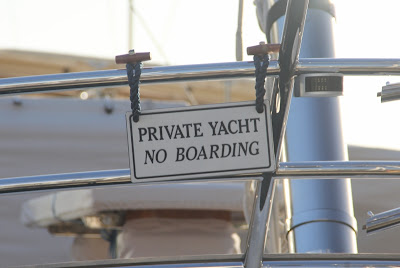